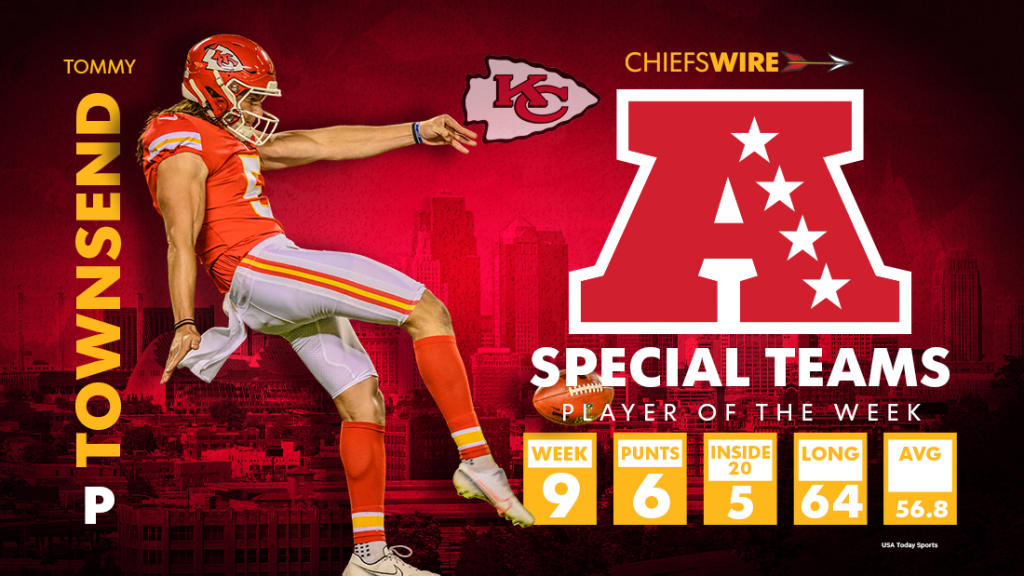 Kansas City Chiefs P Tommy Townsend has been named AFC Special Teams Player of the Week for his Week 9 performance against the Green Bay Packers.

Townsend’s day played a big part in the Chiefs’ 13-7 win over the Packers, with five of his six punts landing inside the 20-yard line. He ended the game with an average of 56.8 yards per punt and with a long of 64 yards.
His 54.3 net punting average on five punts was the highest by a player since 2018.

Townsend was humble about his performance after the game, crediting his teammates on the punt unit for their part of the success.

“Today was just one of those career days where you go out and you just have a great day,” Townsend told reporters after the game. “Of course, none of that would have happened without my gunners on the punt team to get down there and down the ball, scoop up punts. Of course, it’s a huge team effort, I can’t pat those guys on the back enough.”

This marks the second career Special Teams Player of the Week award for Townsend, but his first of the season. He had big shoes to fill when Dustin Colquitt was released, but he has already achieved something that Colquitt never did during his time with the Chiefs. Townsend is the first punter for Kansas City to ever earn the AFC Special Teams Player of the Week twice.