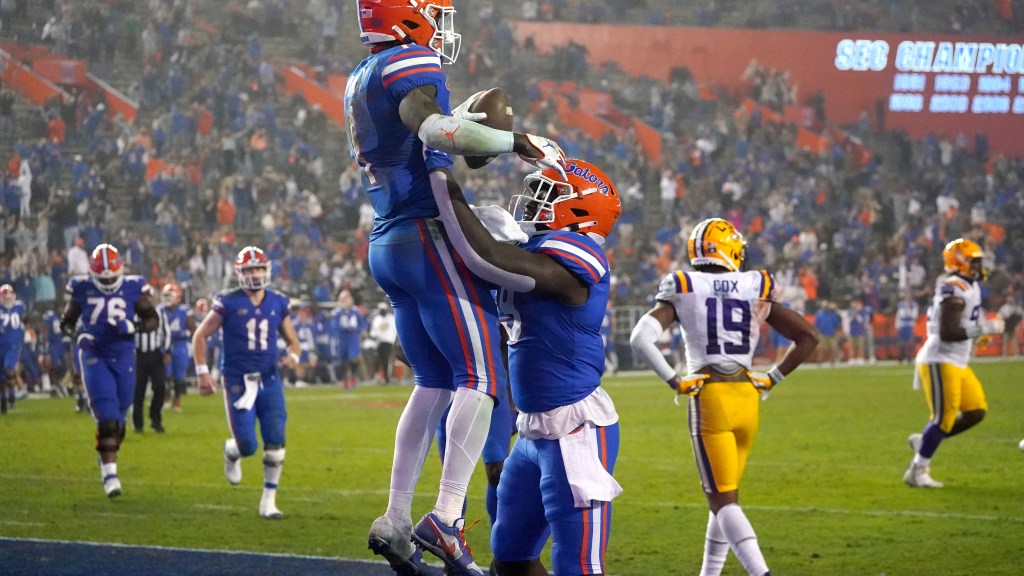 This year’s Florida-LSU matchup doesn’t have as much luster as some of the previous ones. The Tigers sit at 3-3, possibly at the beginning of a spiral after losing to Kentucky 42-21 last week, and they can’t afford to take a fourth loss to the Gators.

Though he’s less than two years removed from winning a national title, Tigers coach Ed Orgeron finds his seat getting hotter and hotter, and a loss to UF could be the straw that broke the camel’s back. CBS Sports’ Barrett Sallee agrees, writing that Orgeron is likely coaching for his job on Saturday.

LSU coach Ed Orgeron’s seat is hotter than spicy jambalaya following last week’s loss to Kentucky, and Florida could be the final nail in the coffin. The Tigers looked completely uninspired against the Wildcats, have lost two straight and are sitting on the brink of three straight rivalry games vs. the Gators, Ole Miss and Alabama.

Orgeron led the program to its first national title since 2007 just two years ago but knows that last year’s .500 record, this year’s struggles and off-the-field issues aren’t what athletic director Scott Woodward expects.

“The best thing for me to do is be very positive. Understand the expectation of LSU,” Orgeron said on Monday. “I will say this and I will say it again: no one has to tell me the LSU expectation. I know them, I was born with them, so I understand. I understand this is not the LSU standard of performance. I understand my job. I get it totally, I know exactly where I’m at and I’m going to go to work as hard as I can today and don’t blink.”

If Woodward doesn’t want to scar the program any further, pulling the plug after the first of those three — assuming the Gators take care of business — could be a last resort to prevent further embarrassment.

But will the Gators take care of business? Sallee thinks so. He has Florida covering a 10.5-point spread, and he said he would like UF to cover even if the spread was larger.

I’m stunned that the Gators are only 10.5-point favorites over a broken LSU team that not only has an embattled coach but just lost its best player for the season, wide receiver Kayshon Boutte. The Gators got right last weekend against Vanderbilt and will light up a Tiger defense that wasn’t even able to slow down Kentucky’s offense last weekend. Yeah, it’ll be played in Death Valley, but the combination of an 11 a.m. kickoff and a disinterested fan base will make this one a blowout. Pick: Florida (-10.5)

The Gators have certainly been known for their letdowns in the past few years, but after the Kentucky game, it’s hard to imagine this team will look past an LSU team that is still talented on the road, no less.

But a blowout win would go a long way toward getting things back on track in Gainesville.