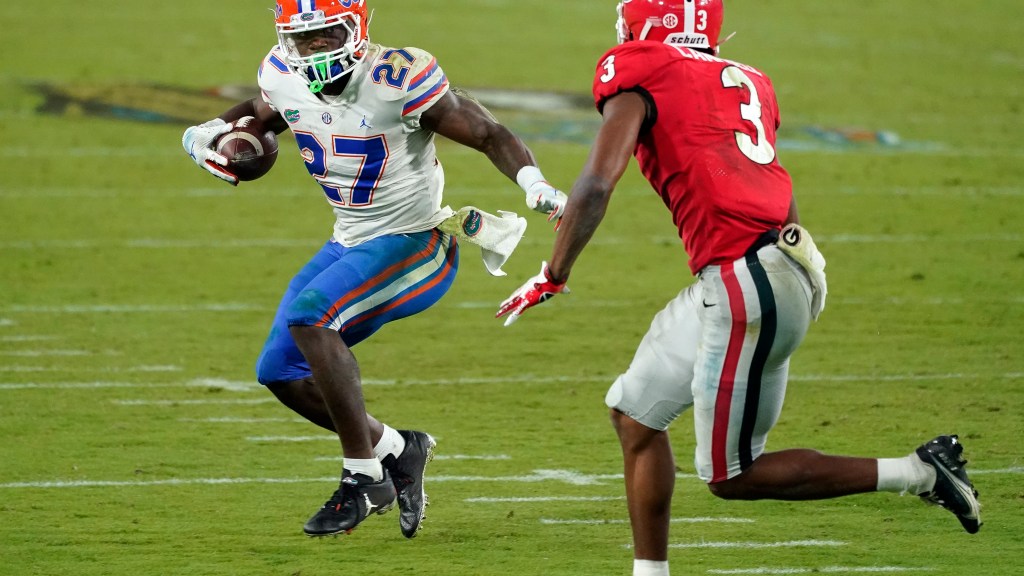 It’s no surprise that Florida finds itself as considerable underdogs on Saturday against the Georgia Bulldogs. UGA has arguably the best defense in college football, and no one has been able to score on it consistently. The Bulldogs are giving up just 6.6 points per game, and that will make things difficult for whichever quarterback gets the nod for the Gators.

Most fans know who they want that guy to be, and CBS Sports’ Barrett Sallee concurred. He said that for UF to have a chance in this one, it needs to start redshirt freshman Anthony Richardson.

Richardson entered for Emory Jones in the second half last game against LSU facing a 15-point deficit. He led a comeback effort that ultimately failed as a result of the defense being unable to stop the Tigers.

Coach Dan Mullen hasn’t yet named a starter, but many feel that Richardson gives the team the best shot. Here’s Sallee’s take.

Georgia coach Kirby Smart and Florida coach Dan Mullen each have quarterback questions to answer this week. But, let’s be real, Mullen’s is the only one that truly matters.

Junior Emory Jones has started all seven games for the Gators, but has 10 touchdowns and 9 interceptions while proving to be a liability at critical times through the air. Freshman Anthony Richardson, on the other hand, hasn’t had his chance yet. He’s averaged 10.6 yards per attempt, rushed for 348 and three touchdowns, and has done so with significantly less playing time than Jones.

Mullen this week was noncommittal on who will get the first snap vs. Georgia.

“We’re going to keep playing them the same way,” Mullen said. “We plan on playing both of the guys like we have.”

It’s a gamble to start Richardson. It’d be like chasing a flush with pocket hearts and another on the flop. It isn’t the best idea, but at least it has a chance of working. Starting Jones would be like betting big with seven-two off-suit and four face cards on the table.

It’s hard to argue with Sallee’s logic here. While Jones deserved the chance to be this team’s starter to begin the year, he just hasn’t been effective enough under center. Richardson hasn’t been perfect, either, but he’s at least shown signs of tremendous playmaking ability. He’s likely the future of the program at quarterback, and with the team sitting at 4-3, now is as good a time as any to make the change.

However, regardless of who starts the game, it doesn’t impact Sallee’s projection. He sees the Bulldogs winning comfortably and covering a 14-point spread in the process.

The Gators defense is going to get torched by Georgia’s offense no matter who starts at quarterback. Stetson Bennett IV and JT Daniels have both been wildly successful deep downfield this year, and the one thing that we know about Florida’s defense is that coordinator Todd Grantham will blitz 20 guys as long as the refs don’t notice. It won’t work, though. Georgia will put this one to bed midway through the third quarter and the Bulldogs win with ease. Pick: Georgia (-14)

While not being elite statistically, Georgia’s offense has been fairly explosive, ranking 28th in the FBS in offensive EPA (expected points added). Meanwhile, while Florida has had a lot of offensive success (thanks largely to improved offensive line play), this will be the toughest defensive front it’s had to face so far.

The Bulldogs are an elite team, and it will take a stellar, near mistake-free performance for the Gators to emerge victorious in this one.


Gators Wire predictions: Does Florida even have a chance against Georgia?


Scouting the Georgia Bulldogs ahead of Saturday’s WLOCP


Behind Enemy Lines: Getting the scoop from UGA Wire ahead of Saturday’s game