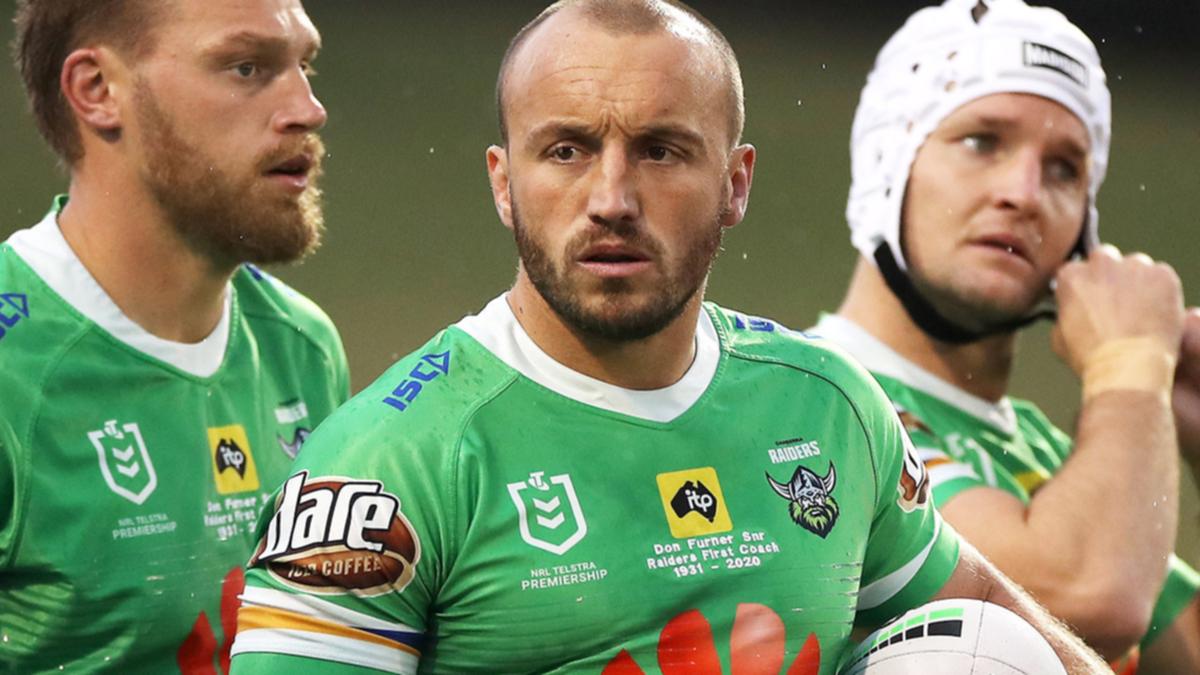 Josh Hodgson’s anticipated move to the Wests Tigers is expected to be locked in “very shortly”, according to 7NEWS reporter Michelle Bishop.

The Canberra hooker has been courted by the Tigers for months with new football boss Tim Sheens looking to add experience to the team’s spine.

However both clubs have been locked in a stalemate over money, with the Tigers only offering to chip in slightly more than half of Hodgson’s $900,000 salary for the 2022 season.

The Raiders meanwhile have indicated they’re happy to see the 32-year-old see out the remaining year of his contract with the club.

That’s despite a turbulent 2021 season for Hodgson in which he stepped down from the captaincy and took public swipes at team management.

It now appears the mooted switch is imminent, with only some final negotiations playing out behind the scenes.

“I am hearing that the Josh Hodgson move is not far off, from the Raiders to the Wests Tigers,” Bishop told SEN on Wednesday.

“They had considered Api Koroisau at one stage, but the Hodgson thing, I’m hearing there’s a bit playing on in the background in terms of his manager trying to get the best money deal for him, which he’s of course entitled to.

“So that’s between the Raiders and the Tigers to work out who’s going to pay what, but we will see him at the Tigers very shortly I’m told.”

The development comes as it was revealed fellow Raiders hooker Tom Starling had been banned from drinking alcohol after being accused of threatening and offensive behaviour after being refused entry to a Terrigal bar on the NSW Central Coast.

The case of Starling, 23, and his brothers, Jackson, 25, and Josh, 20 was briefly mentioned in Gosford Local Court on Wednesday for a bail review.

The NRL player has been charged with one count of threatening or causing injury to a potential juror or witness and offensive behaviour after an alleged confrontation with a security manager at a bar on the Terrigal Esplanade between 8.34pm and 11pm on October 16.

Defence lawyer Samar Singh-Panwar said Tom Starling, who did not appear in court, wanted to have his bail conditions changed, including his listed place of residence from Watson in the ACT to Avoca Beach on the Central Coast and allowing him to attend a wedding at a licensed premises.

His bail conditions include not drinking alcohol and not entering licensed premises.

Singh-Panwar did not seek to have Starling’s ban on drinking alcohol lifted.

Magistrate Scott Nash agreed to the bail changes and adjourned the case to January 11.

According to a police statement, Tom Starling was with his brothers and Chelsea Balzan, 20, when they were refused entry to the Terrigal bar due to capacity limits.

Police claimed the group became agitated and threatened the security manager on several occasions before walking away.

Police attended a short time later and attempted to speak to the group before Starling and Balzan ran off. Starling’s brothers allegedly yelled and hindered police during their inquiries.

Balzan has been charged with one count of threatening or causing injury to a potential juror or witness.

Tom Starling and his brothers are also facing charges over an incident in December last year when they were allegedly involved in a brawl at the Shady Palms restaurant in Kincumber.

The Raiders player was initially charged with five counts of assaulting a police officer in the execution of their duty, one count of affray and one count of resisting or hindering an officer.

The prosecution dropped six of the charges without explanation when Starling appeared in court in January and he pleaded not guilty to the one remaining charge of hindering police.

Three charges against Josh Starling were withdrawn and he pleaded not guilty to two counts of assaulting police, one count of resisting arrest and one count of common assault.

Charges of assaulting police and affray against Jackson Starling were withdrawn and he pleaded not guilty to one count of hindering police.

A fourth man accused over the alleged brawl, Jessie Byrne, 21, had three charges withdrawn but still faces one count of assaulting police and one count of hindering police.

The Starling family, including the brothers’ parents, had been out celebrating a 21st birthday on the night of the alleged clash with police.

A hearing over this incident is listed to be held in May next year.