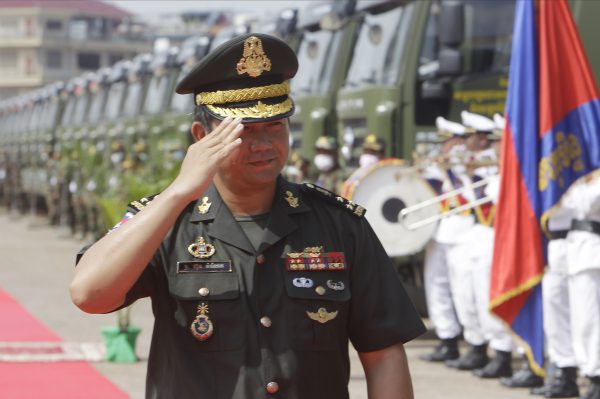 “I declare today to support my son to be the next prime minister but it means nothing without an election. It must be voted on,” Cambodian Prime Minister Hun Sen said on November 2, adding another layer of intrigue to an already eventful week, which saw the rupture of the two opposition leaders’ long-held partnership.

Hun Sen had made some comments in the past about Hun Manet, his eldest son and now all-but-certain successor, taking over, but only hypothetically. In 2018 he called Manet, now the de-facto military chief, a “possible future leader.” But by the end of 2019 he stopped publicly commenting on the matter. Hun Sen also refused to say, for a certain period, how many more years he wanted to remain in power.

Two reasons may explain why Hun Sen this week made his clearest comment yet about Hun Manet’s succession. He’s no doubt buoyed by what appears to be the final stage of the collapse of the opposition Cambodia National Rescue Party (CNRP), the only viable opposition party, which was forcibly dissolved in late 2017. (I’ve reported on that at length here and here.) Sebastian Strangio, writing here in The Diplomat, said “it would be surprising” if the split between opposition leaders Sam Rainsy and Kem Sokha “didn’t play into Hun Sen’s decision to throw his weight behind Manet’s political prospects.”

Second, and as a corollary, now with the opposition more divided than ever, Hun Sen wants to take on the internal disputes within his long-ruling Cambodian People’s Party (CPP). Indeed, his speech appeared more directed to people within his own party than outsiders. Hours after the prime minister’s comments, Cambodian elites lined up to congratulate Manet. Fresh News, the ruling party’s mouthpiece, published almost every letter of their support – a clear sign that this was Hun Sen formally announcing Hun Manet’s heirship, and perhaps a way of him checking on the loyalty of his colleagues. The list included several cabinet ministers: Commerce Minister Pan Sorasak; Suy Sem, the energy minister; Justice Minister Koeut Rith; and Chea Sophara, land management minister. Another was the commander of the National Military Police, Sao Sokha, a former bodyguard and personal adviser to Hun Sen. Even some “opposition” politicians queued up to congratulate Manet.

Noticeable by his absence, though, was Interior Minister Sar Kheng, who is seen as the main rival to Hun Sen within the CPP. Neither, I believe, did Kheng’s son, Sar Sokha, a lieutenant general and a secretary of state, offer his congratulations.

Around late 2020, it became apparent that a substantial share of ruling party officials were skeptical about Hun Manet taking over. Some were wary of his political inexperience. Hun Manet has been promoted way too quickly through the military ranks, according to some, and has held no formal political office. Others, though, especially the ruling party old-guard, like Sar Kheng, were no doubt opposed to a “princeling” getting the nod over themselves, especially if it meant even greater power and wealth flowed into the Hun family. Last year, there was much gossip about Finance Minister Aun Pornmoniroth possibly being a compromise contender to replace Hun Sen.

Importantly, this week Hun Sen didn’t just announce Hun Manet’s succession. He also swatted down any talk of Sar Kheng taking the top job. Gossip about Sar Kheng leading a factional challenge to Hun Sen was piqued again in August when he visited Paris, with some thinking he was there to meet the exiled opposition leaders. During his discursive speech in Sihanoukville on Thursday this week, after asking Sar Kheng to tell the audience his age (70) Hun Sen said the Interior Minister would be 78 by the 2028 general election. Because of their one-year age difference, he added, it meant he might as well continue as prime minister. “I will continue to do it – won’t that be easier?” He also made a similar remark about Defense Minister Tea Banh, 76. “If Kheng comes to be or [Tea] Banh comes to be… let Hun Sen do it.” Such a public put-down is usual for Hun Sen.

Yet it’s still an open question when Hun Sen will formally begin the succession process. At his speech, he intimated that he wants another decade in power but spoke mainly about the 2028 general election, the next after the one due in July 2023. Some of the congratulatory messages to Hun Manet appeared to suggest that the 2023 election could be the date for the handover. This is to be doubted; 2028 is more probable. Granted, waiting until then is risky. Now 69 years old, Hun Sen would be 76 by 2028 – and he will be keen to have Hun Manet in place in case his health begins to falter.

My guess is that Hun Sen will remain prime minister after the 2023 general election, in which Hun Manet (after resigning from the military) will be elected to parliament and be given an important cabinet post, along with a deputy prime minister title. (He will likely be the next defense minister). In that scenario, he can easily fill Hun Sen’s boots at any sign of failing health. As I’ve argued before, the 2023 ballot will largely be treated by the CPP as a plebiscite to convey legitimacy on Hun Manet as the political heir.

My reason for this claim is that the next two years will be immensely difficult for Hun Sen, even without having to sort out internal CPP disputes over succession. Cambodia chairs the ASEAN bloc for 2022, a role which will allow Hun Sen to strut on the world stage, as a befitting way to bow out of politics after more than four decades. Yet this position will take up a considerable amount of his energy next year. Potentially more difficult is economic recovery. GDP growth of 4.5 percent is expected next year, and 5.5 percent for 2023, the World Bank estimates. (That may be optimistic.) My guess is that economic stability will play a leading role in Hun Sen deciding when to hand over power. He won’t want Hun Manet to inherit an economy still in recovery.

No one will be able to rule as authoritatively as Hun Sen, who has been in power since 1985. Once he steps down, the CPP’s central apparatus will lose some degree of influence. That might explain recent reshuffles of provincial officials, so as to deny anyone a provincial fiefdom, and may also explain the latest crackdown on officials over deforestation around the Tonle Sap lake. Sao Sokha, his key ally, was put in charge of this. So expect even more anti-corruption action, to remove officials whose loyalty Hun Sen doubts.

Also, Hun Sen will want to further consolidate Phnom Penh’s loyalty to China. Overlooked amid the political bedlam this week was Hun Sen’s instruction to Tea Banh to stop commenting on the Naval Ream base and stop permitting visits.

And, as I have argued in this column over the years, part of the machinations of a dynastic handover will be a far wider “generational succession.” Manet will not be able to rule properly if the rest of the CPP old guard stay in their posts. They would simply be too authoritative and restive, trying to limit his power out of envy and fear. Speaking this week, Hun Sen specifically stated such a generational succession would happen. “[We] will put younger people in,” he said. “[We] know how to organize it.”

But there’s reason to question whether they do know how to do it. Cabinet reshuffles aren’t uncommon. Prak Sokhonn has been foreign minister since only 2016, for instance. But most ministers in the important cabinet posts have been there for decades. Sar Kheng has been interior minister since 1992. Tea Banh was made defense minister in 1993. Khieu Kanharith has been at the information ministry since 2004. Mam Bunheng has been health minister since 2008. Almost the entire cabinet are now in their 60s, if not 70s. Even the relatively youthful ones aren’t that young. Aun Pornmoniroth is 56. Hang Chuon Naron, the education minister, is 59. The youngest cabinet member, at 41, is Say Sam Al, the environment minister and son of Senate president Say Chhum.

But the scale of this generational succession is daunting. Hun Manet is 44, and will be just 46 if he takes over after the 2023 general election and 51 if in 2028. He’ll need to keep some old heads (and Hun Sen loyalists) around for safety and advice. One might be able to sketch a rough outline of Hun Manet’s allies (and possible cabinet picks) from the list of people who congratulated him this week. But will Sar Kheng and Tea Banh have to go in 2023? (The latter is likely as Hun Manet is a prime candidate for the Defense Ministry, especially if Hun Sen wants to weaken Sar Kheng’s fiefdom in the Interior Ministry.) And, if so, how do they get their family members into important positions? None of this is going to be easy and it possibly needs to be done in stages, so requiring more than the 19 months between now and the 2023 ballot.