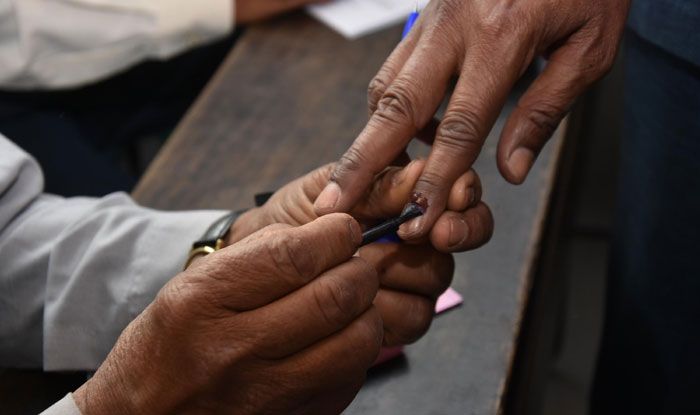 New Delhi: The stage is set for byelections to three Lok Sabha seats and 29 assembly constituencies spread across 13 states and one UT, Dadra and Nagar Haveli, to be held on Saturday with many of them being seen as an issue of prestige for parties hit by defections. In majority of the seats, the main fight will be between the Bharatiya Janta Party and Congress candidates. Adequate security and Covid-19 safety measures have been put in place for the electoral exercise, the Election Commission has said. The counting of votes will take place on November 2.Also Read – Bengaluru Issues Fresh Guidelines For Durga Puja, Restricts Gathering to 50 During Prayers | Complete List of Guidelines Here

The seats where Lok Sabha by-elections will be held are: Dadra and Nagar Haveli, Mandi in Himachal Pradesh and Khandwa in Madhya Pradesh. In all the three Lok Sabha constituencies, the sitting members had died. The Mandi seat fell vacant after the death of Ramswaroop Sharma (BJP) in March. The by-election to the Khandwa parliamentary constituency was necessitated following the death of BJP member Nand Kumar Singh Chauhan while in Dadra and Nagar Haveli, it was due to the demise of Independent Lok Sabha member Mohan Delkar. Also Read – Fully Vaccinated People Not Following Guidelines in Maharashtra: Ajit Pawar Expresses Concern

Of the 29 assembly constituencies going to the bypolls, five are in Assam, four in West Bengal, three each in Madhya Pradesh, Himachal Pradesh and Meghalaya, two each in Bihar, Karnataka and Rajasthan and one seat each is in Andhra Pradesh, Haryana, Maharashtra, Mizoram and Telangana. Though bypoll was also announced for the Shamator-Chessore assembly constituency in Nagaland, Nationalist Democratic Progressive Party candidate S Keoshu Yimchunger was declared elected uncontested on October 13. Also Read – West Bengal Bypoll: Scuffle Breaks Out Between BJP and TMC Workers, 53.32 Percent Voters Turnout Recorded Till 5 PM

Full list of states to witness bypolls in one or more seats on Saturday:

In Assam, bypolls will be conducted in Gossaigaon, Bhabanipur, Tamulpur, Mariani and Thowra seats. The ruling BJP has fielded candidates in three seats leaving the other two to alliance partner UPPL. The Congress put up nominees in all the five, while its former allies, the AIUDF and the BPF, are contesting in two and one seats respectively.

Bypolls in Gossaigaon and Tamulpur were necessitated due to death of the sitting MLAs, while the incumbents of Bhabanipur, Mariani and Thowra resigned from their seats to join the ruling BJP. Elected MLAs Rupjyoti Kurmi and Sushanta Borgohain resigned from the Congress and Phanidhar Talukdar from AIUDF and are now fighting on BJP tickets.

Four assembly constituencies in West Bengal will go to the bypolls with all eyes set on Dinhata where TMC heavyweight Udayan Guha is looking to reclaim the seat, which the BJP had snatched from him by a whisker in the April elections. The bypoll to Dinhata was necessitated following the resignation of Nisith Pramanik, now Union Minister of State for Home Affairs, as he chose to retain his Lok Sabha membership.

The other three seats where polling will be held are Santipur in Nadia district, Khardah in North 24 Parganas and Gosaba in South 24 Parganas. In Santipur, too, BJP MP Jagannath Sarkar resigned from the assembly, thus calling for a bypoll. Bypolls to Dinhata and Santipur are seen as prestige battles for the BJP, which is currently grappling with exodus of MLAs and senior leaders.

In Madhya Pradesh, bypolls will be held for the Khandwa Lok Sabha constituency and Jobat (ST), Raigaon (SC) and Prithvipur assembly seats. The high-decibel campaign for the bypolls to four constituencies, including one Lok Sabha seat and three Assembly segments, where 55 candidates are in the fray in the straight contest between ruling BJP and opposition Congress, ended on Wednesday evening.

By-elections in Rajasthan’s Vallabhnagar and Dhariawad are being viewed as a significant test for the performance of the Ashok Gehlot-led Congress government. Though the number of constituencies going to bypolls is not crucial from the viewpoint of the government’s stability but the results will send a message across the state about the performance of the government, which had faced a major threat last year due to rebellion of the then deputy chief minister Sachin Pilot and 18 MLAs led by him.

Only one constituency, Deglur in Nanded district, will be going to polls on Saturday. While the Congress has fielded Jitesh Antapurkar, son of Raosaheb Antapurkar, whose death necessitated the polls. Meanwhile, the BJP has nominated former Shiv Sena legislator Subhash Sabne.

Polling will also be held in Huzurabad assembly constituency in Telangana with the ruling TRS, opposition BJP and Congress locked in a triangular contest. The by-election has been necessitated in view of the resignation of Eatala Rajender in June following his removal from the state Cabinet over allegations of land grabbing. Rajender, who dismissed the allegations, has quit the TRS and joined the BJP. He is seeking re-election on BJP ticket.

he bypoll is seen as a do-or-die battle for Rajender, while it is significant for the BJP as it aims at emerging as the alternative to ruling TRS in the 2023 Legislative Assembly elections. It is crucial for the TRS as well as it would like to demonstrate that its dominance in state politics continues unchallenged.

The by-elections in Karnataka’s Hanagal and Sindgi constituencies will be the first electoral test for Chief Minister Basavaraj Bommai, who had replaced B S Yediyurappa.

The bypolls to Mandi Lok Sabha and Arki, Fatehpur and Jubbal-Kotkhai Vidhan Sabha seats in Himachal Pradesh are crucial as assembly elections are due in the state next year. According to local Congress and BJP leaders, the results of the bypolls are likely to impact the assembly elections.

The bypoll to the Ellenabad assembly constituency in Haryana’s Sirsa district is set to witness a triangular contest, with opposition INLD’s Abhay Singh Chautala, whose resignation over the farm laws issue necessitated the election, eyeing another win. The three central farm laws have emerged as key issue as a major part of Ellenabad is rural with people mostly relying on agriculture.

The poll body will conduct assembly bye-elections at Tarapur (Munger) and Kusheshwar Sthan (Darbhanga) in Bihar. The seats fell vacant after the demise of MLAs Shashi Bhushan Hazari (Kusheshwar Sthan) and Mewalal Choudhary (Tarapur), both from the JD(U).

Three bye-elections are due on Saturday in Rajabala, Mawphlang and Mawryngkneng seats. In Meghalaya, the National People’s Party (NPP) headed by Chief Minister Conrad K. Sangma and the Congress fielded candidates in all the three seats, the BJP, which is a constituent of the NPP-dominated Meghalaya Democratic Alliance (MDA), has fielded candidate in Rajabala.

In Mizoram, the bypoll to the Tuirial was necessitated following the death of sitting Zoram People’s Movement (ZPM) legislator Andrew H. Thangliana. There are four candidates in the fray – K. Laldawngliana of the ruling Mizo National Front, Laltlanmawia of the ZPM, Chalrosanga Ralte of the Congress and the BJP’s K. Laldinthara.