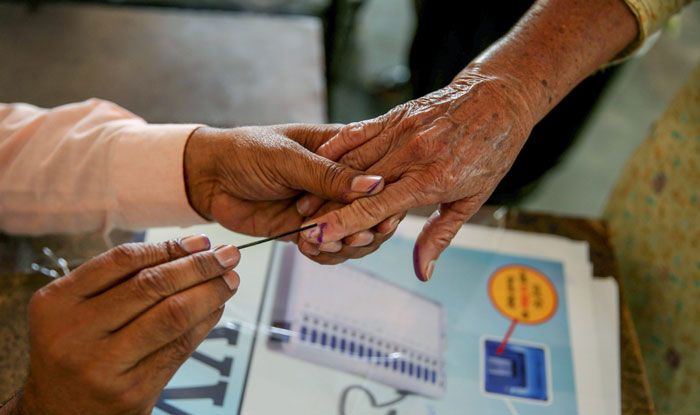 On the other hand, a turnout of 50 percent to 80 percent was recorded in bypolls to three Lok Sabha and 29 assembly constituencies spread across 13 states.  Notably, the voting passed off peacefully and it was ensured that all COVID-19 safety measures were followed. Also Read – Telangana Develops India’s First eVoting Solution, To Hold Dummy Polls on Oct 20

Himachal Pradesh: In Himachal Pradesh, the Mandi Lok Sabha seat from where Pratibha Singh is contesting saw 100 per cent polling. She was pitted against BJP’s Khushal Singh Thakur, a Kargil war hero who is trying his luck at the hustings for the first time. The polling percentage in the three assembly seats – Fatehpur, Arki and Jubbal-Kotkhai – was 62.4 percent, 61.33 per cent and 66.1 percent respectively till 5 PM.

Madhya Pradesh: Khandwa Lok Sabha seat in Madhya Pradesh, whose MP Nand Kumar Singh Chauhan of the BJP had died, witnessed a turnout of 63.88 per cent, while an estimated 64.60 per cent voting was recorded in the three Assembly seats.

Assam: In Assam, 69.60 percent voting was reported in five assembly constituencies of Gossaigaon, Bhabanipur, Tamulpur, Mariani and Thowra seats till 5 PM. The ruling BJP has fielded candidates in three seats leaving the other two to alliance partner UPPL. The Congress put up nominees in all five, while its former allies, the AIUDF and the BPF, are contesting in two and one seats respectively.

West Bengal: A high voter turnout of nearly 71 percent was recorded till 5 PM in West Bengal’s four assembly constituencies. The BJP and TMC held two seats each. Barring a few stray incidents, polling, which began at 7 AM, passed off peacefully in all four constituencies, an Election Commission official said.

Bihar: In Bihar, an estimated 49.60 percent voting was recorded in the two assembly constituencies of Kusheshwar Asthan and Tarapur which were held by the JD(U).

Rajasthan: An average of 70 per cent voter turnout was recorded in the bypoll to Dhariawad and Vallabhnagar assembly constituencies of Rajasthan. The bypolls were necessitated due to the demise of Congress MLA from Vallabhnagar Gajendra Singh Shaktawat and BJP legislator from Dhariawad Gautam Lal Meena.

Karnataka: An estimated 56.78 percent voter turnout was recorded in the bypolls to Sindgi and Hangal assembly constituencies in Karnataka. The by-elections have been necessitated following the death of Sindgi JD(S) legislator M C Managuli and BJP’s C M Udasi from Hangal and will be the first electoral test for Chief Minister Basavaraj Bommai, who had replaced B S Yediyurappa.

Telangana: In Telangana, byelection was held in the Huzurabad assembly constituency with the ruling TRS, opposition BJP and Congress locked in a triangular contest. The by-election has been necessitated in view of the resignation of Eatala Rajender in June following his removal from the state Cabinet over allegations of land grabbing. Rajender, who dismissed the allegations, had quit the TRS and is contesting on a BJP ticket.

Meghalaya: Over 80 per cent of the one lakh plus voters exercised their franchise in the bye-elections to three assembly constituencies in Meghalaya on Saturday, Chief Electoral Officer FR Kharkongor said. There was no report of any untoward incident during the polling in Mawryngkneng, Mawphlang and Rajabala, he said.

Bypolls in other NE states: The highest turnout of 81.29 per cent was recorded in Mizoram, followed by Meghalaya, with 80.86 per cent, and 73.38 per cent in Assam. The counting of votes will take place on November 2.

(With inputs from PTI, IANS)