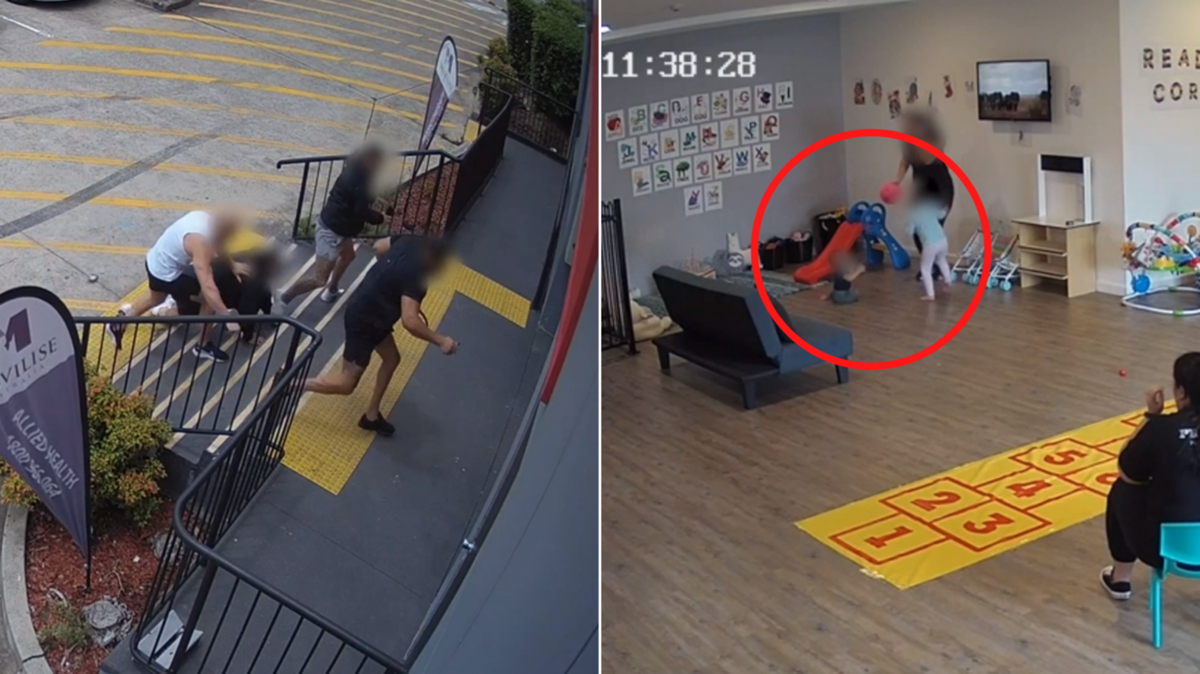 Bullets narrowly missed hitting children in a crèche attached to a gym that was targeted in a shooting in Sydney’s west last month.

In new vision released by NSW Police of the November 29 shooting, as seen in the video above, at least three young children and two carers were inside at the time.

As the shots were fired, the children were seen running and crawling towards a carer.

Photos from inside the centre show bullet holes in the wall, near where the children had been playing.

The new vision also shows the moment one man was shot in the leg during the targeted attack on World Gym Rowood Road, at Prospect.

He and three other men were seen strolling outside the gym before the shots were fired at the group.

One man was seen falling over stairs as the group scrambled inside.

No one else was injured.

Police are now looking for any information about a Mazda wagon that was used in the shooting.

The vehicle was seen fleeing the carpark towards Blacktown Road.

The Mazda, which had been stolen from the Hunters Hill area on October 5, was later found burnt out at Blacktown.

Investigators are looking at whether the failed gangland hit is linked to an ongoing feud between the Hamzy and Allameddine families.

Investigators from Strike Force Parbery are now appealing for anyone who may have information about the vehicle, or who may have been anyone acting suspiciously in the Hunters Hill area on that date, to come forward.

Criminal Groups Squad Commander Detective Superintendent Grant Taylor said anyone who may have dashcam vision from the area of the shooting is also urged to contact police.

“The location of the shooting is within an industrial area and we’re hopeful truck drivers, courier workers, and other motorists may have dashcam which would be helpful to our investigations – even if it precedes the day of the shooting,” Det Supt Taylor said.

“Any dashcam owners who were in the vicinity of the Stoddard Road industrial area, as well as Flushcombe Road, Reservoir Road and Great Western Highway between 10.30am and 12.30pm that day is urged to come forward.

“We’re also confident the Mazda wagon – which was a dark, metallic colour and had distinctive black roof-racks – was travelling with other vehicles around the time of the shooting.

“Police are seeking to identify the occupants of the Mazda and the additional vehicles, so I implore you to look closely at the CCTV and contact police if you can assist our ongoing inquiries.

“These public place shootings endanger the lives of innocent members of the public, and in this instance, left bullet holes in a children’s play area where young toddlers were being cared for at the time.

“The investigation of acts of violence which put our community in danger is the highest of priority for police, and all offenders – as well as those who facilitate or assist them – will be prosecuted.”

The men involved in the shooting remain on the run.