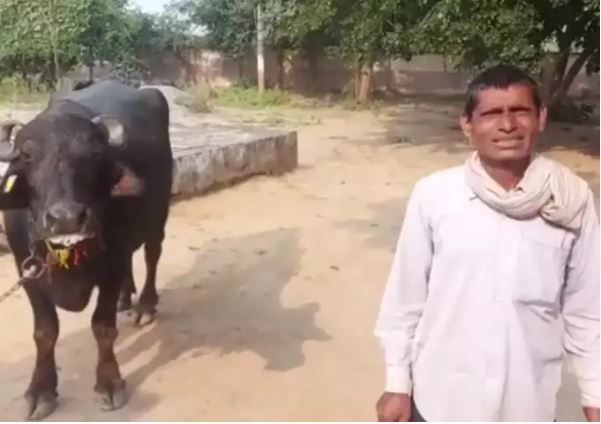 Bhopal: A hilarious incident took place in Madhya Pradesh’s Bhind district after a farmer from the area went to a police station taking along his buffalo, complaining that the animal was refusing to be milked, reported news agency PTI quoting an official on Sunday. The farmer suspected the buffalo to be under the influence of witchcraft, the official said.Also Read – ‘Bunk Coaching Classes, Procrastinate’: IAS Officer Shares Hilarious Video on How to Fail UPSC Exam | Watch

A video showing the man seeking help from the police in Nayagaon village on Saturday over the issue also surfaced on social media. “The villager, identified as Babulal Jatav (45), submitted a complaint at Nayagaon police station on Saturday, saying his buffalo was not allowing to be milked since the past some days,” Deputy Superintendent of Police Arvind Shah told PTI. Also Read – Viral Video: 3 Girls Dance to Satyameva Jayate 2 Song Kusu Kusu, Nora Fatehi is Mighty Impressed| Watch

According to the complainant, some villagers told him that the animal was under the influence of witchcraft, he said. About four hours after giving the application, the farmer again reached the police station with his buffalo and sought help from the police again, he said. Also Read – Forget Free Ka Khaana! Bride Asks Guests to Pay Rs 7370 For Food at Wedding & We’ve Lost Our Appetite

(Based on PTI inputs)