Former Liberal Party staffer Brittany Higgins has condemned Scott Morrison’s response to her rape allegation, claiming she needed him to act as a Prime Minister, not a father.

In an address to the National Press Club, Ms Higgins referred to comments Mr Morrison made last year when he said he understood her rape allegation in a different lens after being urged to consider how he’d feel if their daughters had been assaulted.

“I didn’t want his sympathy as a father. I wanted him to use his power as Prime Minister,” Ms Higgins said.

Ms Higgins alleged she was assaulted by a fellow political staffer inside then-Defence Minister Linda Reynolds’ office in 2019.

He has denied all allegations and the case is ongoing.

She said Mr Morrison “needed his wife’s advice to help contextualise my rape in a way that mattered to him personally … and that’s how he realised it was a bad thing”.

Ms Higgins has called for better support for victims, with a change in laws, language and national culture needing to start at the top.

“That starts with the Prime Minister – yes, some of his language last year was shocking and, at times, admittedly, a bit offensive,” she said.

“But his words wouldn’t matter if his actions had measured up. Then, or since.”

The former Liberal staffer proclaimed there has not been enough change since she came forward with her allegations, despite a fresh probe on workplace harassment both inside and outside the walls of parliament.

Ms Higgins said the call to action last year was a moment of national reckoning for victims of sexual assault but now she fears it may be considered a “blip on the radar”.

“A raging current that would not be turned aside by tired old platitudes from father of daughters,” she said.

“But I stand here today fearful that this moment of transformative potential, the bravery of all those women who spoke up and stood up and said ‘enough is enough’ is in danger of being minimised to a flare-up, a blip on the radar, a month-long wonder in the national conversation.”

Ms Higgins emphasises that she does not “speak for all survivors”, acknowledging that while all experiences are different – similarities exist.

She said she wanted to create an environment where other survivors could speak about their experiences without fear.

‘A sense of a national moment of reckoning’

Ms Higgins is joined by 2021 Australian of the Year Grace Tame.

Ms Tame, a child sexual assault survivor who was groomed by her paedophile teacher, and Ms Higgins, who alleged she was sexually assaulted by a colleague in Canberra, have been part of a reckoning in the past year.

Ms Higgins fronted the March 4 Justice rally in Canberra the next month, telling the thousands gathered: “This isn’t a political problem, this is a human problem.” 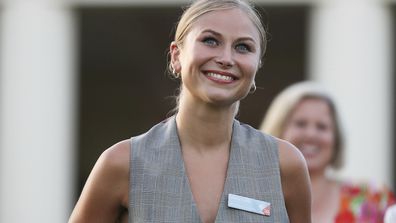 How Grace Tame and Brittany Higgins inspired a movement

Sparked by Ms Higgins’ allegations, the report found one in three parliament staffers claiming to have faced sexual harassment.

Twenty-eight recommendations were made to overhaul the toxic culture – and the government said it would implement all of them – including an apology given by federal politicians yesterday.

“I am sorry to Miss Higgins for the terrible things that took place here. And that what should have been a place for safety and contribution, turned out to be a nightmare.”

Opposition Leader Anthony Albanese also acknowledged the role Ms Higgins played in lifting the lid on the culture of Parliament.

“You have torn through a silence that acted as a life-support system for the most odious of status quos,” he said.

“No one deserves to feel unsafe or disrespected in any workplace, let alone our national Parliament.”

In January 2012, Ms Tame was named Australian of the Year, beginning her tenure with a powerful speech about being groomed by her Maths teacher and losing her virginity to a paedophile.

For years Tasmania’s gag laws meant she was unable to speak out, while her abuser bragged on Facebook.

Ms Tame would go on to win permission from the Supreme Court to tell her story in 2019.

She, along with 16 other survivors of the #letherspeak campaign – created by journalist Nina Funnell in partnership with Marque Lawyers and End Rape On Campus Australia – would ultimately succeed in overturning Tasmania’s archaic gag law.

Though from different walks of life – Ms Higgins and Ms Tame have formed an alliance through their shared trauma.