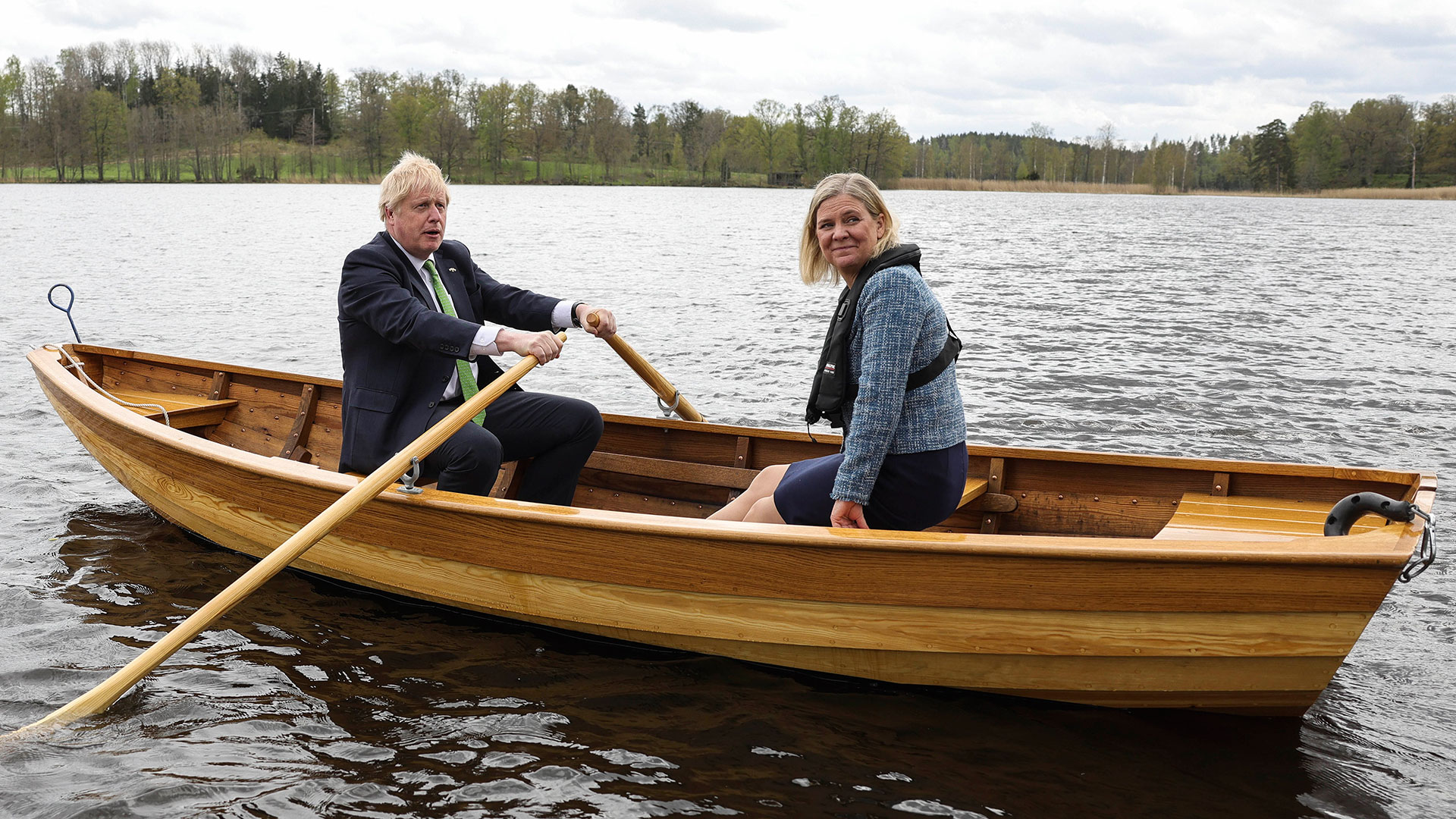 The Prime Minister yesterday signed historic security treaties with both of the traditionally neutral Scandinavian countries — in a two-fingered salute to the Russian president.

The accords were inked as Finland and Sweden mull over joining Nato amid a “new chapter of the Cold War”.

The UK will increase troop presence in both countries and step up intelligence sharing.

Britain will also support joint cyber attack defences, it was agreed, as the ­countries committed to backing each other at a time of war.

On a whistle-stop tour yesterday of Stockholm and Helsinki — the capitals of Sweden and Finland — Mr Johnson said: “In the event of an attack we will come to the other’s assistance, upon request, and it will be up to the other party to say what kind of assistance they want.”

Pushed on whether or not that would include sending in troops, and risking a conflict with Russia, the PM replied: “In the event of an attack, then yes we will come to each other’s assistance including with military assistance.”

In a warning to the Kremlin, Mr Johnson added: “The many carcasses of Russian tanks that now litter the fields and streets of Ukraine, thanks to Swedish-developed and British-built NLAWS, certainly speak to how effective that co-operation can be.”

Although tiny in population, Finland shares a lengthy land border with Russia and is only about 250 miles from St Petersburg in Russia.

And Russian warplanes have menaced Swedish airspace in recent weeks, as the country debates joining Nato.

Following talks with Finland President Sauli Niinistö, Mr Johnson said the “solemn declarations” reflect the “extreme difficulty of the times we are in”.

He was greeted by Mr Niinistö for the signing at the Presidential Palace in Helsinki, just hours after putting his name to a pact with Swedish PM Magdalena Andersson at Harpsund, her country retreat near Stockholm.

The pair also took a rowing trip for the cameras, where Mr Johnson joked: “We really are in the same boat now.”

He added: “We are steadfast and unequivocal in our support to both Sweden and Finland and the signing of these security declarations is a symbol of the everlasting assurance between our nations.

“These are not a short-term stop-gap, but a long-term commitment to bolster military ties and global stability and fortify Europe’s defences for generations to come.”

The PM warned Russia’s invasion of Ukraine marked the “end of the post-Cold War” and said it had “sadly opened a new chapter”.

A Kremlin spokesman hit back last night to say Russia was “watching very closely anything that can affect Nato configuration near our borders”.

No10 replied by saying that democratically elected countries, such as Sweden or Finland, could decide their own fates.

Both Mr Johnson and Mr Niinistö were keen to stress that Nato was a defensive organisation and posed no threat to anyone.

In the event of an attack, then yes we will come to each other’s assistance including with military assistance.

Asked whether, joining Nato would provoke more Russian aggression, Mr Niinistö replied; “They are ready to attack their neighbouring country, so my response would be that, ‘You caused this — look at the mirror’.”

Mr Johnson, deploying some of his strongest language yet to condemn the Russian president, said: “This week, many of us have been paying tribute to the brave men and women who secured victory and peace in Europe 77 years ago.

“So, it’s a sad irony that we have been forced to discuss how best to fortify our shared defences against the empty conceit of a 21st century tyrant.”

He added: “Most importantly, this is an agreement that enshrines the values that both Sweden and the UK hold dear, and which we will not hesitate to defend.”

Ms Andersson said she was “very happy” to sign the bilateral agreement.

Speaking to the BBC during his visit, Mr Johnson said it was up to the Swedes whether or not they joined Nato, despite keeping neutral throughout the Cold War.

And he hinted: “That may come to a head in the next few days and weeks.

“It is not for the UK to intervene in that debate. Suffice to say that we would strongly support Sweden’s accession if that was what the Swedes chose to do.

“We would certainly try to make things go as smoothly and easily as possible.”