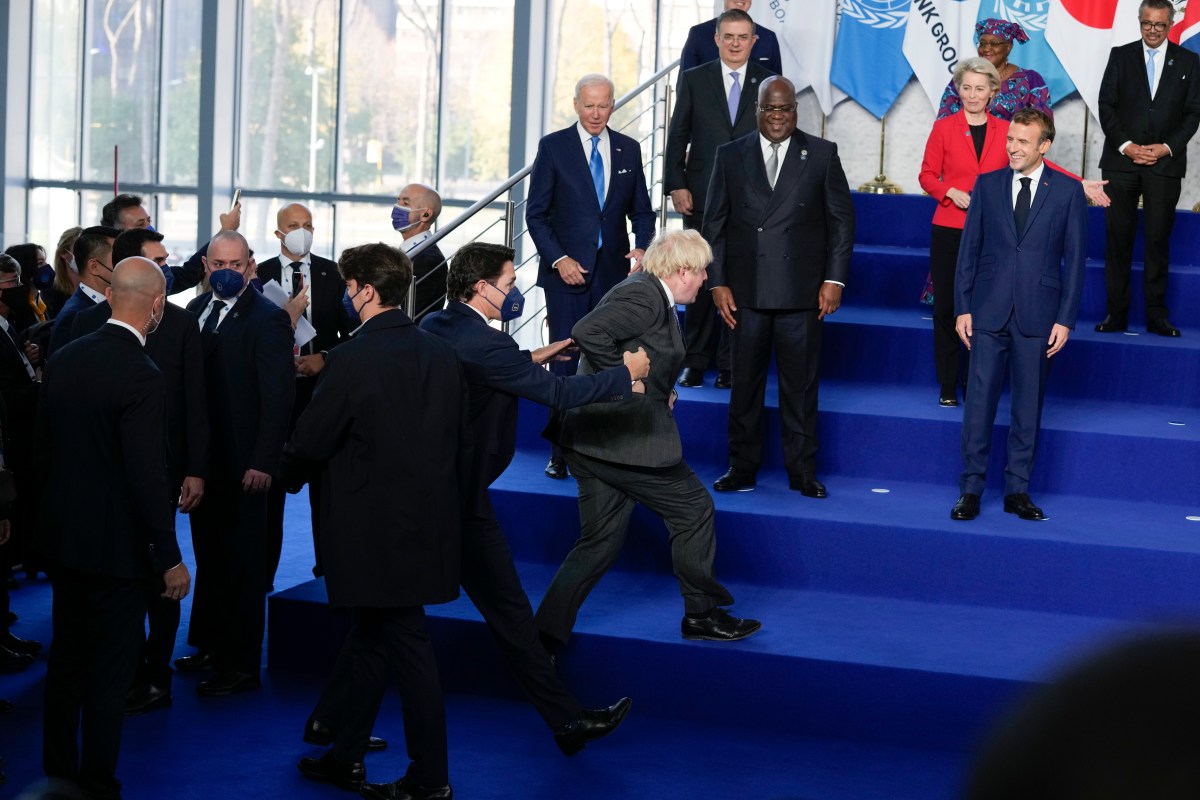 BORIS Johnson has threatened to take legal action over the fishing row and warned the European Union not to side with France.

It comes after the Prime Minister warned Emmanuel Macron he’s got “bigger fish to fry” during the G20 summit in Rome that kicked off today.

As tensions over the fishing rights have been mounting, Brexit minister Lord Frost said the UK Government is “actively considering” starting legal proceedings and warned the EU that if France carries out its threats it would be “in breach of its obligations” under the post-Brexit trade deal with the UK.

In a series of tweets, the Conservative peer rallied against comments made by French prime minister Jean Castex in a letter to European Commission president Ms von der Leyen, that the UK should be shown “it causes more damage to leave the EU than to stay in”.

Lord Frost said: “To see it expressed in this way is clearly very troubling and very problematic in the current context when we are trying to solve many highly sensitive issues, including on the Northern Ireland Protocol.

“This is all the more so as the threats made by France this week to our fishing industry, to energy supplies, and to future co-operation, for example through the Horizon research programme, unfortunately, form part of a pattern that has persisted for much of this year.

“As I set out yesterday to (European Commission vice-president) Maros Sefcovic, these threats, if implemented on November 2, would put the EU in breach of its obligations under our trade agreement.

“So we are actively considering launching dispute settlement proceedings as set out in Article 738 of the TCA.”

Meanwhile, Boris Johnson said that France could have breached a Brexit treaty and that he will “do whatever is necessary to protect British interests,” Sky News reported.

Mr Johnson insisted the fishing row was “dwarfed” by the climate change agenda that needs to be tackled in the coming days.

During interviews in Rome, he left the door open to finding a resolution with Mr Macron as he described the UK as being “very keen to work with our friends and partners”.

Mr Johnson and Mr Macron put on a show of friendship as they fist-bumped while meeting in the Italian capital this morning.

Boris arrived late for a leaders’ photo and scuffled his way towards Macron at the top of the stairs.

France last night begged the rest of the EU to join its fishing war against Britain as a punishment for Brexit.

French PM Jean Castex said Brussels must sign up to its campaign against the UK to keep the bloc together.

The G20 summit kicks off today four months after Mr Macron and Mr Johnson clashed at the G7 summit over Brexit.

Asked by The i about meeting the French leader again, Mr Johnson said: “It’s about fish rather than sausages this time, I don’t know if that’s an improvement.

“Actually, there are bigger fish to fry, everybody knows that. Am I worried about that?

Meanwhile in a round of broadcast interviews today, the British Prime Minister said the world could be heading for a new “dark ages” if it fails to tackle global warming and appealed to the world’s leading economies to do more to cut emissions.

He told the BBC that his “priority” is “tackling the biggest threat to humanity, and that is climate change”.

And in an interview with Sky News he said the fishing row was “small beer, trivial, by comparison with the threat to humanity that we face”.

Boris has warned Britain could trigger legal repercussions in the post-Brexit trade agreement next week over its row with France.

If France breaks the Brexit trade deal “then obviously we will have to take steps to UK interests”, he told Sky News.

Asked if he would rule out triggering the dispute resolution mechanism next week, Mr Johnson added: “No of course not, I don’t rule that out.”

In a letter to Brussels bigwig Ursula von der Leyen, French PM Mr Castex wrote: “It is essential to clearly show Europeans honouring commitments is non-negotiable and there is more harm from leaving the EU than remaining.”

The threat sparked fury in Downing Street and a backlash from Tory MPs.

Anthony Mangnall, for the fishing community of Brixham, hit back: “This is completely unacceptable.

“The French should not be behaving in this manner.

“We are happy to work with them but not if they behave in this way.”

Germany and Brussels have already slapped President Macron down and urged him not to drag the EU into a fresh spat.

The French leader has raised tensions further by claiming the fishing row is a test of Britain’s global credibility and accused Britain of backtracking over Brexit commitments.

He told the Financial Times: “When you spend years negotiating a treaty and then a few months later you do the opposite of what was decided on the aspects that suit you the least, it is not a big sign of your credibility.”

Meanwhile, as authorities across the Channel charged a British skipper for fishing in their waters without a licence, Mr Johnson vowed to do “whatever is necessary” to protect our fisherman from the French.

And the Royal Navy was put on standby.

In May, the PM dispatched two Navy patrol boats, HMS Severn and HMS Tamar, to protect Jersey after French vessels blocked the port.

He will now tell Mr Macron today to rein in his gobby ministers to avoid an all-out fishing war as the two leaders come face to face for a showdown at the G20 summit.

As tensions threaten to boil over, the PM said he would try to force the French president to step back from the brink. But he warned the swaggering French that he stands ready to do whatever it takes to protect our fishing vessels.

And raging UK ministers have threatened to mire French fishing vessels in red tape — including forcing them to land their catches on our shores — if Paris refuses to back down.

As the bitter cross-Channel trade war escalated, he was trapped on the vessel with his crew — not knowing when they will be freed.

The bearded man, bemused by the publicity, was served a summons but will not appear in court until next August — and faces a £63,000 fine if convicted.

It is claimed his Cornelis Gert Jan vessel fished in the French exclusive economic zone without a licence.

The crew have been told to remain on the boat in Le Havre, “for their own safety”.

One grinned as he collected Union Jack mugs and a bottle of Scotch from supporters.

Speaking on the plane to Rome last night, Mr Johnson said: “We will do whatever is necessary to ensure UK interest.” The PM vowed to confront Mr Macron in Rome today and will urge his counterpart to remember Britain is a close ally of France — not an enemy.

But in a swipe, Mr Johnson said: “We fear there may be a breach of the terms of the trade cooperation agreement.” He added: “Obviously, we will stand by to take the appropriate action.”

He and Mr Macron are meeting, along with US President Joe Biden, to discuss the crisis in Iran.

The pair will then meet again on Sunday when Mr Johnson is expected to confront Mr Macron about France’s behaviour.

Environment Secretary George Eustice, meanwhile, warned “two can play at that game” as he threatened ban French boats and bind its trawlermen in red tape.

He also suggested Mr Macron had allowed the fishing wars to flare up to play to nationalist French voters ahead of next year’s election.