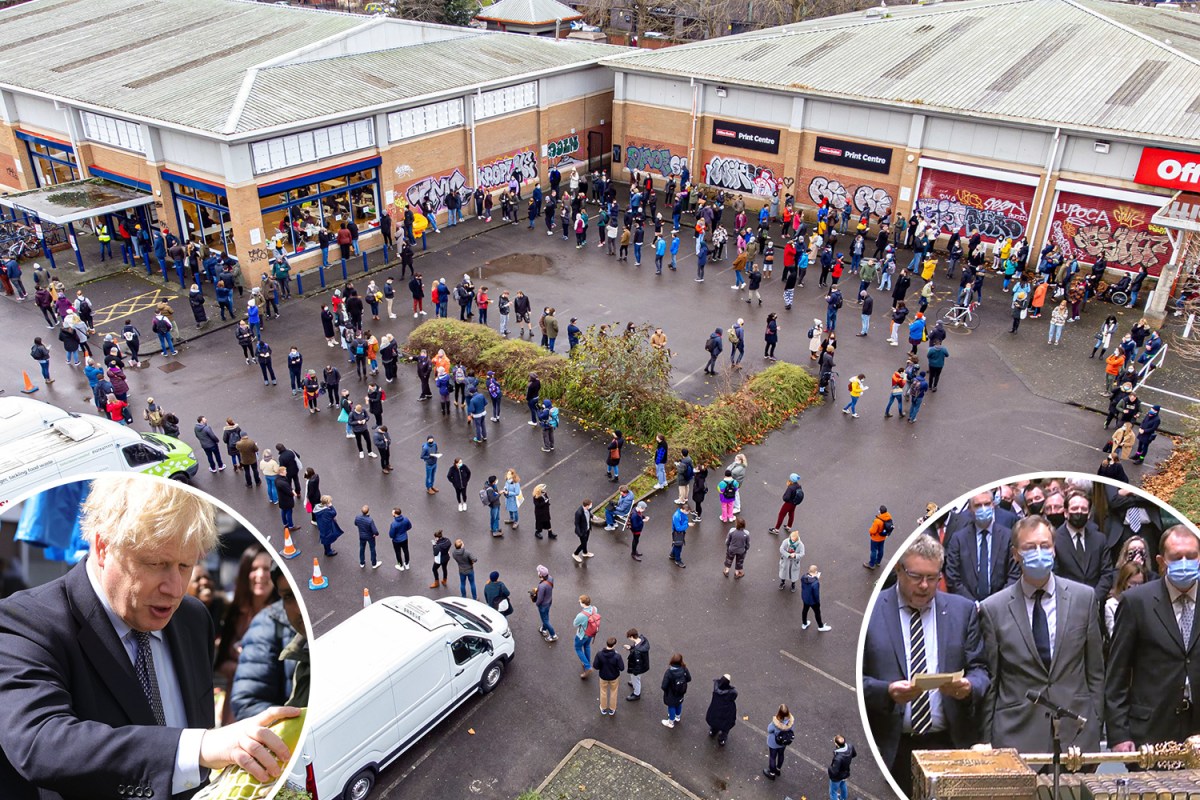 BORIS Johnson was given a bloody nose in the Commons yesterday as 98 of his own MPs voted against his Omicron measures.

His plans, which included mandatory vaccine passports for some large venues, were approved but opponents fear it is just a first step in pushing the country into a much harsher Plan C.

It comes as doctors warned that the Covid variant could see pubs, shops and even hospitals hit by staff shortages within a month.

She also brought in tougher visiting rules for care homes and said she would make it a legal duty for employers to ask staff to work from home.

His battering in the Commons came after a series of votes on Plan B’s other measures aimed at tackling the mutant strain of the virus.

But it was particularly painful as it came just a few minutes after he had begged his backbenchers to support him and wake up to the scale of Omicron.

At a testy private meeting of his MPs, the PM repeatedly insisted he did not want any further lockdown measures but warned they had to face up to the reality of a looming spike in Omicron cases.

And he promised MPs they would get a vote in an emergency Christmas Commons recall if things became dramatically worse.

But his pleas fell on deaf ears as almost half of his backbenchers voted against vaccine passports ­yesterday — the move only being passed thanks to Labour votes.

🔵 Read our Covid-19 live blog for the latest updates

Tory Geoffrey Clifton Brown said Mr Johnson needed to up his game as he was shocked at the major division within the party.

He said: “We all know what happens to disunited parties. It is going to involve a major change in the way that he does things.”

Ahead of the vote, ministers and MPs were given doomsday warnings of a January of closures — even without a lockdown.

In a bleak update to the Cabinet on Tuesday morning, the PM and Chief Medical Officer Professor Chris Whitty warned the new ­variant could lead to serious staff shortages across Britain.

They told the meeting, held virtually for the first time in months, that things were looking very bad.

The pair said that even the most conservative estimates suggested the virus would unleash a tidal wave of new cases and hospitalisations.

It would mean hundreds of thousands of people forced off work and into isolation.

Last night, No 10 denied suggestions that medics had warned that the number of isolating doctors and nurses could become so bad that some hospitals risked being closed.

Health Secretary Sajid Javid has warned that infections may already have rocketed to 200,000 a day.

But Covid expert Prof Sir David Spiegelhalter called it “a bit naughty” to say the figure was so high and suggested the true number was just a quarter of that.

MPs fear No 10 is waiting for them to go home for Christmas on Thursday before plunging England back into a version of lockdown.

Ministers are considering a slew of draconian restrictions should the spread of Omicron worsen.

Discussions have included a return to the rule of six, the closure of pubs and hospitality, banning households mixing indoors or at all, and a return to social distancing.

Schools could even be ordered to stay shut for all pupils apart from vulnerable children and those whose parents are essential workers.

Former minister Sir Desmond Swayne accused the Government of developing a “ministry of fear” and leaving the hospitality sector in the gutter.

He questioned which “Stalinist minds” had been let loose to “twist the fear lever” once again.

Mark Harper, chairman of the Covid Recovery Group of MPs, said ministers had gone into panic mode and said those who thought this meant there would be no more restrictions were kidding themselves.