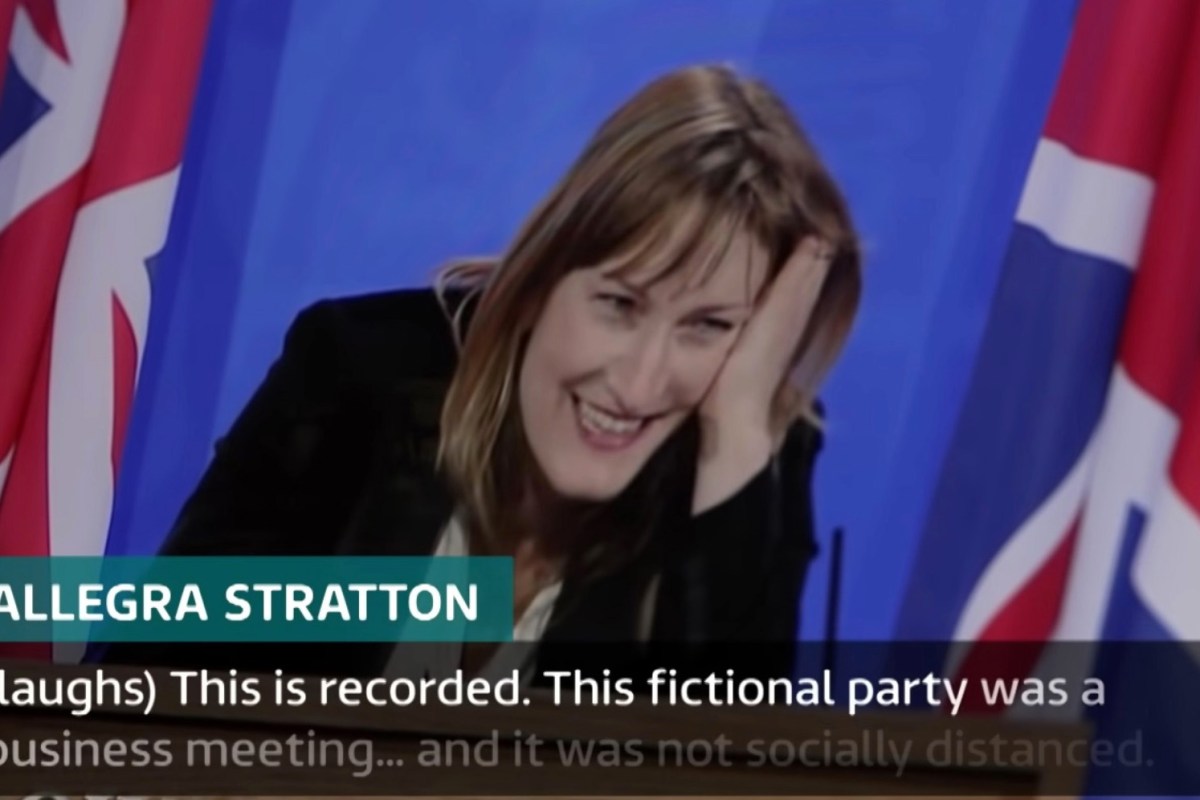 Ministers went to ground this morning – pulling out of all broadcast interviews – ahead of the PM’s lunchtime grilling in the Commons.

Furious Tory MPs broke ranks to demand an apology while Sir Keir Starmer prepares to haul him over the coals for the alleged rules breach at PMQs.

Downing St still insists that “there was no Christmas Party” on December 18 last year when Tier 3 restrictions in London forbid indoor gatherings.

The Government is sticking to its days of denials despite video leaked to ITV showing the PM’s top aides laughing about enjoying “cheese and wine”.

At a mock press conference in the No9 briefing room Mr Johnson’s then press secretary Allegra Stratton practised taking questions about the party.

Ms Stratton – the COP spokeswoman – joked that the party “was a business meeting and it was not socially distanced.”

Robert Halfon said: “I certainly think that those who were doing the video should apologise for the insensitivity of it when people were suffering and struggling all through that time.”

Tobias Ellwood called for the country’s top civil servant to investigate the video.

Others say the alleged breach should rule out any lockdown restrictions this Christmas.

Ex-Health Secretary Matt Hancock took Mr Johnson at his word, telling GMB: “What I know is that the Prime Minister said that no rules were broken. And nobody’s suggesting that he was at this party.”

His successor Sajid Javid was supposed to the usual round of breakfast interviews this morning but pulled out amid the chaos. BBC Breakfast even empty-chaired the Health Secretary.

Foreign Secretary Liz Truss ignored questions on the way to a speech she was making in central London.

One government source said the entire debacle was an “absolute s***show”.

In footage of the fake presser, obtained by ITV, one of the PM’s advisers asked: “I’ve just seen reports on Twitter that there was a Downing Street Christmas party on Friday night, do you recognise those reports?”

Ms Stratton joked: “I went home!” before she paused to consider how to respond.

The aide added: “Would the prime minister condone having a Christmas party?”

Ms Stratton, who was due to lead daily political press briefings in the £2.5million press room before the plan was ditched earlier this year, laughed and replied: “what’s the answer?”

Another No10 staffer popped up to say: “It wasn’t a party, it was cheese and wine.”

Ms Stratton added: “Is cheese and wine alright? It was a business meeting…”

She went on to warn her colleagues the mock briefing “is recorded” and “this fictional party was a business meeting, and it was not socially distanced”.

The video was taken on December 22, just days after the alleged gathering was said to have taken place in No10.

Ministers and the Government have repeatedly denied that a bash took place in the heart of Government when London was under Tier 3 restrictions – meaning gatherings were banned.

In-person business meetings were allowed but only when strictly necessary, and had limits on numbers.

The PM was grilled again on the bash last night, saying: “I am satisfied myself that the guidelines were followed at all times.”

Downing Street said in response to the leaked footage last night: “There was no Christmas party. Covid rules have been followed at all times.”

A Met Police spokesman said: “We are aware of footage obtained by ITV News relating to alleged breaches of the Health Protection Regulations at a Government building in December 2020.

“It is our policy not to routinely investigate retrospective breaches of the Covid 19 regulations, however the footage will form part of our considerations.”

Sir Keir Starmer blasted the relevations as “shameful” and called on the PM to come clean and say sorry now.

The Labour boss said: “People across the country followed the rules even when that meant being separated from their families, locked down and – tragically for many – unable to say goodbye to their loved ones.

“They had a right to expect that the government was doing the same. To lie and to laugh about those lies is shameful.

“The Prime Minister now needs to come clean, and apologise. It cannot be one rule for the Conservatives and another for everyone else.”

And former Education Secretary Gavin Williamson was accused of hosting a party for staff in the department – just days earlier.

A bash with drinks and canapès was held on December 10 2020 for staff to thank them for their work over the pandemic, as officials frantically tried to keep schools open and prepare for mass testing in the new year.

But one source played down the reports saying: “I’ve never seen a canapé in the DfE.” Tier 2 rules in place in London at the time stated no mixing with other households except for work purposes.

A Department for Education spokesman said: “On 10th December 2020 a gathering of colleagues who were already present at the office – and who had worked together throughout the pandemic, as they couldn’t work from home – took place in the DfE office building in London at a time when the city was subject to tier 2 restrictions.

“The gathering was used to thank those staff for their efforts during the pandemic.

“Drinks and snacks were brought by those attending and no outside guests or supporting staff were invited or present.

“While this was work-related, looking back we accept it would have been better not to have gathered in this way at that particular time.”

Last night top Tories came out to urge Downing St to get a grip on the story.

And Roger Gale MP broke cover to say: “The No.10 party has all the hallmarks of another ‘Barnard Castle’ moment.

“No.10 clearly has some serious questions to answer. Fast.”

Prime Minister Boris Johnson: ‘I’ve said many times now that I think this Christmas will be considerably better than last Christmas…’