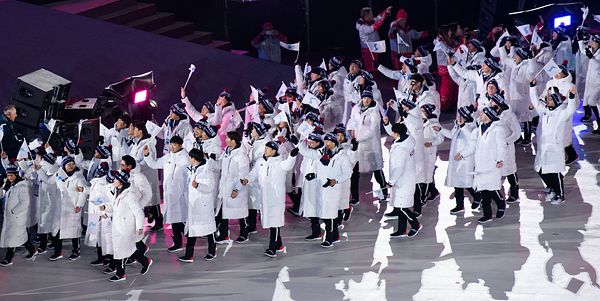 White House Spokesperson Jen Psaki announced on Monday that the United States would diplomatically boycott the Beijing Winter Olympics on Monday. With that, the Moon administration’s final attempt to reactivate the peace process by declaring a formal end to the 1950-53 Korean War during the Games is de facto ended.

“The Biden administration will not send any diplomatic or official representation to the Beijing 2022 Winter Olympics and Paralympic Games given the PRC’s ongoing genocide and crimes against humanity in Xinjiang and other human rights abuses,” Psaki said in a press briefing, using the acronym for the People’s Republic of China.

“U.S. diplomatic or official representation would treat these Games as business as usual in the face of the PRC’s egregious human rights abuses and atrocities in Xinjiang. And we simply can’t do that,” Psaki said.

Seoul’s Foreign Ministry Spokesperson Choi Young-sam said on Tuesday that South Korea “hopes the Beijing Winter Olympics will contribute to the peace and prosperity of East Asia and the world, and the inter-Korean relations.” Choi added that Washington notified Seoul of its decision through diplomatic channels prior to its announcement but has not demanded that South Korea also join the diplomatic boycott for the Olympics.

Despite Choi’s remarks, South Korea is being put again in a position to choose either the United States or China in deciding whether to send a delegation during the Beijing Winter Games. As South Korean President Moon Jae-in has only five months left before leaving office, experts predict that Seoul would likely send diplomatic or official delegations to Beijing in February, as Moon needs the Chinese government’s support for his peace process. However, if more countries announce diplomatic boycotts of the Beijing Winter Olympics in the upcoming days, South Korea could reduce the size or seniority of the delegation.

The South Korean government said that it has not decided yet whether to send a delegation to the Beijing Winter Olympics, nor the size of a potential delegations.

“The U.S. decision to implement a diplomatic boycott of the 2022 Winter Olympics definitely puts a further damper on already weak prospects for a breakthrough in inter-Korea relations in Beijing,” Mason Richey, a professor of international and area studies at Hankuk University of Foreign Studies in Seoul, told The Diplomat.

As China, North Korea’s biggest ally and largest trading partner, is the host of the upcoming Winter Olympics, there were initially high hopes that the 2022 Games could set the stage for an inter-Korean breakthrough similar to the one that preceded the 2018 Games in PyeongChang, South Korea. Those hopes took a blow in early September, when the International Olympic Committee banned North Korea from the Beijing Winter Olympics after Pyongchang choose not to take part in the Tokyo Summer Olympics. Still, there was hope that the IOC could be persuaded to change and allow qualified North Korean athletes to participate in the Olympics.

Richey mentioned that “this ban is modifiable, and presumably if Beijing or South Korea pushed hard enough the IOC would reconsider, but the conditions for diplomacy are not great anyway.”

After Washington’s announcement, U.S. allies will face pressure to stand with Washington by announcing their own diplomatic boycotts of the Beijing Winter Olympics. Within a day of the U.S. announcement, New Zealand and Australia both said they would not send delegations to the Olympics, although they cited different reasons: (the Omicron variant and pandemic concerns for New Zealand, and China’s human rights issues for Australia).

As cases of the Omicron variant are rising in countries around the world, New Zealand’s choice to bow out but blame the pandemic provides an attractive option for countries that want to avoid alienating either Washington or Beijing. Experts expect that more and more U.S. allies – possibly including the United Kingdom, Canada, and Japan – could also decide not to send delegations to the Beijing Olympics in the upcoming weeks. That would make it even more challenging for Seoul to seek a breakthrough to restore stalled nuclear talks and inter-Korean dialogues as it did during PyeongChang Winter Games in 2018, experts said.

Meanwhile, 35 Republican members of the U.S. House of Representatives sent a letter to U.S. National Security Advisor Jake Sullivan on Tuesday to express concerns over a “premature peace treaty.” The letter demands North Korea’s denuclearization first before declaring a formal end to the Korean War. The letter is more evidence that Seoul and Washington may have different views on the sequence and timing of the end-of-war declaration. If Moon fails to draw sufficient attention from the countries involved, the declaration could be delayed until after the South Korean presidential election in March next year – and then the idea might be scrapped altogether, depending on the choices of the next South Korean administration.

Seoul has been working closely with Washington to make a draft for the end-of-war declaration since Moon proposed the initiative in September, but experts have raised questions and concerns over the potential decoupling of the South Korea-U.S. military alliance, a long-time demand of North Korea’s. Critics also say the declaration would do nothing to address the security threat to South Korea from North Korea’s growing nuclear and missile capabilities.

This week, Seoul held the U.N. Peacekeeping Ministerial virtual meeting from December 7-8. Originally there were some hopes for an announcement of progress on an end-of-war declaration at the meeting, but there was no breakthrough. Instead, South Korea used the meeting to celebrate the 30th anniversary of its accession into the United Nations. Seoul also pledged to play a leading role in supporting U.N. peacekeepers with advanced technologies and medical capacities while introducing its efforts to build a peaceful Korean Peninsula and support the United Nations’ peacekeeping operations.