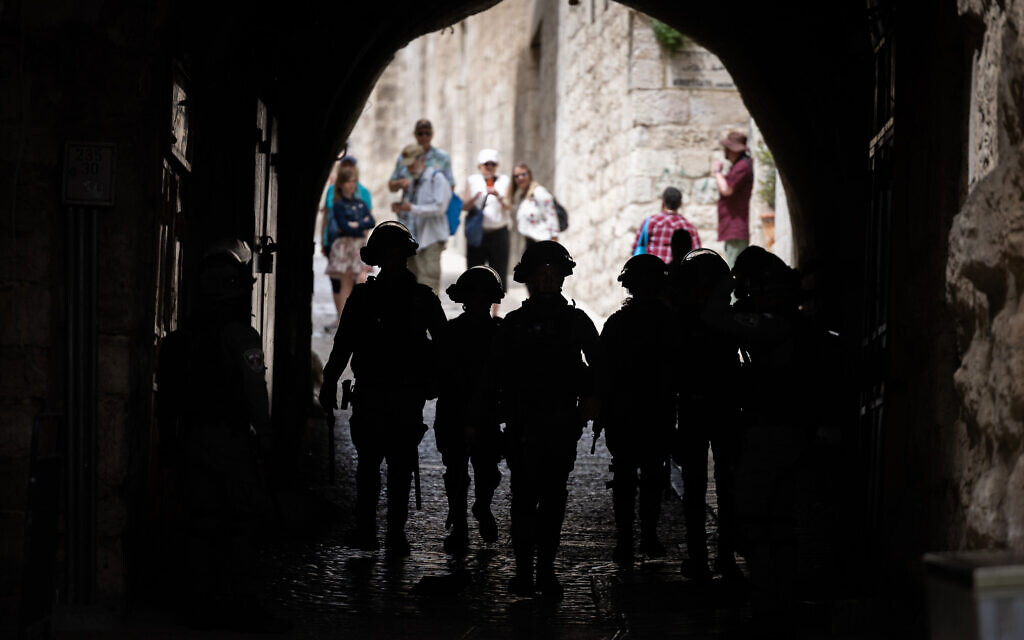 Amid violent clashes in Jerusalem, Prime Minister Naftali Bennett on Sunday said that Israeli forces have “free rein” to continue operations to maintain security, while stressing that officials were working to restore calm.

Following a situational assessment with defense officials and ministers, Bennett said that an effort should be made to allow members of all religions to celebrate their holidays in Jerusalem, while at the same time “continuing to deal with rioters who violate public order.”

He added that he instructed that security for buses heading to the Western Wall and the Old City be bolstered, and that police prevent the distribution of doctored videos and false news that he said were intended to rile up tensions in the area and disrupt the routine during the Muslim holy month of Ramadan. He stressed that “security forces are prepared for any scenario.”

According to police, hundreds of Palestinian youths — many of them masked — were stockpiling rocks in the Al-Aqsa compound that they planned to use along with iron bars and makeshift barricades to riot and try to prevent non-Muslims from touring the compound.

According to the Red Crescent, 17 Palestinians were treated for injuries sustained in clashes with police at the site Sunday morning, five of whom were taken to the hospital. Police said that nine Palestinians were arrested.

Police said officers worked to distance the Palestinians and allow the visits to go ahead, and Jewish visitors were later seen touring the site.

Many Jews head to the Western Wall and the Old City during the week of Passover, which began Friday night. Non-Muslims can only visit the Temple Mount during certain hours and are barred from praying at the site, which is considered the holiest in Judaism and the third-holiest in Islam.

In response to the clashes, the Jordanian Foreign Ministry said in a statement on Sunday that “Israel’s measures to change the status quo on the Mount are a dangerous escalation. Israel bears full responsibility for the consequences of the current escalation that is thwarting efforts invested to bring about calm.”

“The Israel Police has no right to organize visits by non-Muslims there. Only the Muslim Waqf does,” the ministry added, referring to the Jordanian-run organization that oversees the site.

Palestinian Authority President Mahmoud Abbas asked the US to intervene in the matter.

“The [US] administration must break its silence in the face of this aggression that threatens to burn the region,” a statement from his office read. “The international community must intervene immediately to provide protection for the Palestinian people.”

Following Abbas’s statement, Israel’s Foreign Ministry spokesperson Lior Hayat said that “instead of calming the situation, the Palestinian Foreign Ministry has chosen to join extremist elements in the distribution of fake news, with the aim of escalating violence.”

Hayat asserted that “Israel maintains freedom of religion and worship in Jerusalem, in the holy places of the three religions that celebrate their holidays during this period,” and said that “any attempt to present another false picture further aids Palestinian terrorist organizations and criminals.”

“These same organizations defile the spirit of Islam with their behavior,” he added.

Passover this year intersects with the Muslim holy month of Ramadan, which normally sees increased tensions around the Old City. Sunday is also Easter, with Christian pilgrims expected in the Old City.

The confluence of the holidays this year has been seen for months as potential kindling for an eruption of violence.