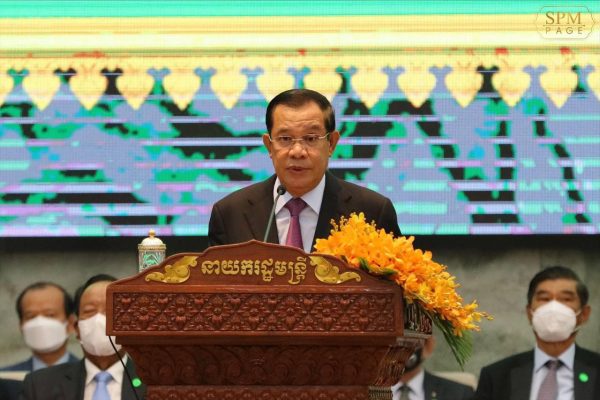 Cambodian Prime Minister Hun Sen has set the tone for his country’s year as chair of ASEAN, warning he “will do what it takes to crack down” on dissidents planning any protests against his one-party rule in 2022.

Speaking after a brief meeting with Australian Foreign Minister Marise Payne, Hun Sen presented his focus for Cambodia’s stint as ASEAN chair. The “political and security” pillar topped the agenda, with a focus on ASEAN unity and centrality.

But accompanying his message were warnings for the supporters of hundreds of opposition dissidents who have been rounded-up over the last two years and detained on charges ranging from incitement and treason to insulting Cambodia and its monarch.

“I will do what it takes to crack down [on] protests during Cambodia’s ASEAN chairmanship,” Hun Sen said in a dispatch published by the government friendly Fresh News service. “If you violate the laws, you will be sentenced even amidst Cambodia’s hosting [of] ASEAN.”

Most of those charged are supporters of the outlawed opposition Cambodian National Rescue Party (CNRP), which came tantalizingly close to winning the popular vote at elections in 2013.

Protests followed and the CNRP was dissolved by the courts in 2017 amid a crackdown on the free press and civil society groups. That enabled the long ruling Cambodian People’s Party to win every seat contested at general elections in 2018.

Chairing the 10-nation bloc of ASEAN is a year-long event that Hun Sen – ever conscious of his legacy – and the government take very seriously. It is an obvious chance for Cambodia to put its best foot forward in opening up post-pandemic.

The 2022 summits will take on even more importance amid the hope that leaders and foreign ministers from the United States to China, India, Japan, and beyond will attend in person, as opposed to the webinars deployed over the last two years as COVID-19 ended face-to-face meetings.

Charles Dunst, adjunct fellow with the Southeast Asia Program at the Center for Strategic and International Studies (CSIS), recently noted Cambodia’s turn promises to be a difficult year, with COVID-19 and China firmly on the agenda.

He said ASEAN needs strong leadership in halting the crisis in Myanmar, but Cambodia had “no commitment to democracy, human rights, or any of the other principles that Malaysia, Indonesia, and others have said they want reinstated in Myanmar.”

Phnom Penh was widely praised when it first hosted ASEAN in 2002 and initiated the Declaration on the Conduct of Parties in the South China Sea, a forerunner to the Code of Conduct (CoC), which remains under negotiations nearly two decades later.

But in 2012 the Cambodia-hosted ASEAN Summit was marred by protests and remembered for Phnom Penh’s shift back into the Chinese orbit. The bloc failed to issue a joint statement for the first time because Cambodia refused to accept criticism of China’s assertiveness in the South China Sea.

Former Ambassador Pou Sothirak, who is the executive director of the Cambodian Institute for Cooperation and Peace, said progress on a CoC was expected but a final agreement was unlikely because some members of ASEAN and China would hinder efforts to find a resolution.

“Our Prime Minister Hun Sen and Foreign Affairs Ministry have stated again and again that ASEAN is not a court and Cambodia is a member of ASEAN so Cambodia is also not a court on this disputed area,” he said.

Dunst said Cambodia’s pro-China outlook as ASEAN attempts to finalize a CoC and its “passivity” over the rivalry between China and the United States will likely see stagnation, reinforcing international claims over the bloc’s futility.

“In normal times, inaction would be acceptable. ASEAN would make it through the year with limited controversy and few deliverables,” he said. “Some progress would be made on the sidelines. Everybody would move on and do it again next year.

“But in 2022, there will be far too many ongoing crises for ASEAN to remain inert.”

He said Southeast Asia’s best interests relied on regional states to take on responsibility themselves through ASEAN, but “unfortunately, Cambodia appears unwilling to accept that challenge.”

Whether that scenario pans out remains to be seen. Regardless, ASEAN and Cambodia are facing a very different year and Hun Sen’s style of leadership, honed over 37 years, will provide a test for those at home and those coming from abroad – in equal measures.

Luke Hunt can be followed on Patreon and Twitter.