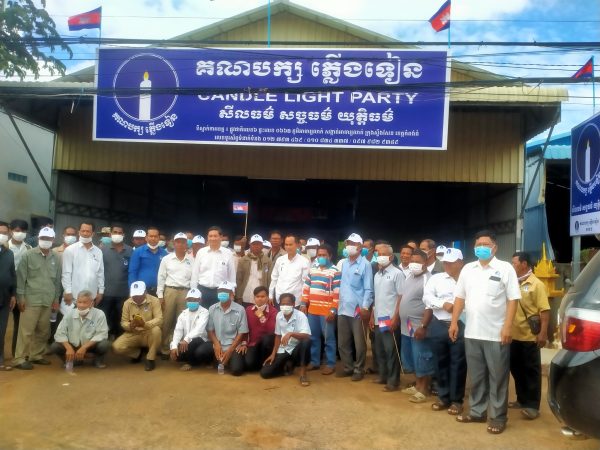 Cambodia’s smaller political parties are beginning to organize in anticipation of commune-level elections in June, an important bellwether for national polls in July 2023. While there is little chance that either of the elections will be meaningfully free or open, their conduct will give some indications of how much political space the ruling Cambodian People’s Party (CPP) is willing to permit once it closes its grip on another five-year term.

Yesterday, the royalist party Funcinpec, a former powerhouse of Cambodian politics that has since faded to near oblivion, held a congress at which it elected Prince Norodom Chakravuth as its new president. Chakravuth is the eldest son of Prince Norodom Ranariddh, who led the party to victory at United Nations-organized elections in 1993 and died in late November.

During the congress, Chakravuth said that he was optimistic about Funcinpec’s ability to attract fresh voters at the June 5 commune election and to inflict some blows on the CPP’s armored façade. “I am going to reunite the former royalists, Sihanoukists and Ranariddhists, so that the party can return to its former levels of success,” he told party delegates.

Another party that is gearing up for the commune polls is the Candlelight Party (CP), the latest incarnation of the Sam Rainsy Party (SRP), which merged with Kem Sokha’s Human Rights Party to form the now-banned Cambodia National Rescue Party (CNRP) in 2012.

The party’s acting president Thach Setha told Radio Free Asia that the CP has now established headquarters in every Cambodian province and has built up 80-90 percent of its local infrastructure. “I have been to all 25 provinces and municipalities … The party’s popularity is higher than it was in 1995,” Thach Setha said. “People have sacrificed physically and emotionally, and they have even contributed their resources as well.”

The Candlelight Party is explicitly positioning itself as a successor to the CNRP, which came close to besting Prime Minister Hun Sen and the CPP at the 2013 election but was banned by the courts in November 2017, two months after its leader Kem Sokha was arrested for treason. The CPP went on to win all 125 seats in the National Assembly, inaugurating the current period of unvarnished one-party rule.

The CP, which has the same logo as the former SRP, reactivated itself late last year, in a move that helped precipitate the collapse of the alliance between Rainsy and Sokha and their respective factions of the banned party. In November, the two factions broke apart amid public insults and acrimony, after Sokha announced on his Facebook page that he would no longer be associating with Rainsy, who he said had “walked away from the original principles and spirit of unity” that guided the formation of the CNRP.

With Rainsy continuing his involvement as the exiled figurehead of the CP, it remains to be seen now what role, if any, Sokha will play in the coming election season. He is currently on trial for treason, but past precedent suggests that the case will end in a token conviction and royal amnesty that will allow him to return to political life – perhaps in time to poach votes from his former ally at the upcoming elections.

The collapse of the Rainsy-Sokha alliance, which held for nearly a decade and brought the CNRP close to victory in 2013, has left Hun Sen and his party without a major challenger. In this context, it is unlikely that any single party will be able act as a vehicle for the simmering popular discontent, nor that the CPP would allow such an outcome to eventuate. Funcinpec, meanwhile, has been a partly owned subsidiary of the CPP since at least 2006, and very far from re-staging its 1993 victory, its best hope is to capture enough of the vote that it can appeal for some minor honorary posts in the next CPP administration.

Hun Sen’s government does have some incentive to loosen the reins and permit a more convincing performance of multiparty democracy than it allowed at the 2018 national election. Since the CPP’s clean-sweep of the polls and its full-bore assault on civil society and the independent press, Phnom Penh’s relations with the Western democracies have nosedived, and a greater degree of political openness could at least stem any further decline. The recent collapse of the CNRP pact also gives the CPP greater scope for giving some ground without threatening its monopoly in power.

But this has to be weighed against both the paranoia of senior CPP officials, who see regime change plots behind every Western expression of concern, and the need to ensure a stable and predictable political environment in advance of the expected power transition from Hun Sen to his eldest son, Hun Manet, a sensitive process that is most likely to happen at some point between the 2023 and 2028 elections.

Whatever end up transpiring in the run-up to June’s commune election, interest in the upcoming electoral cycle lies less in the identity of the victor than in the nature and extent of the rigging.