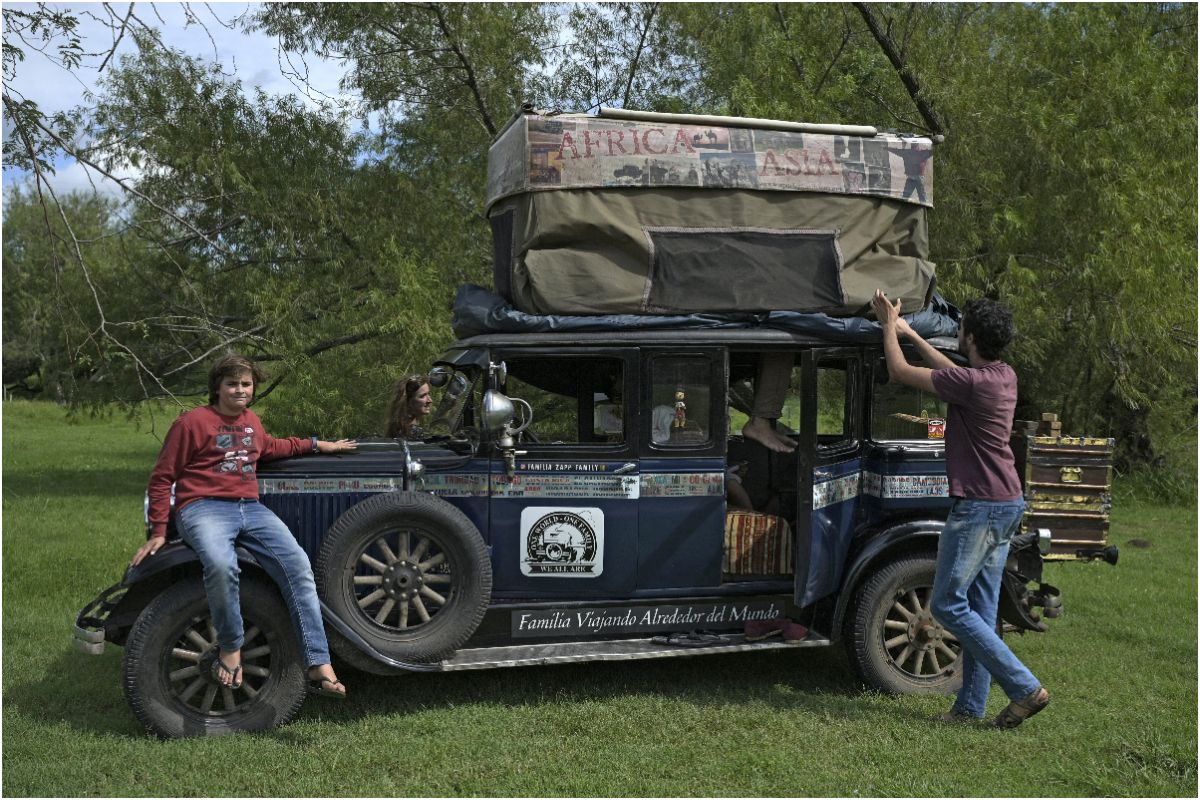 New Delhi: How much do you love travelling? From cutting down stress to refreshing our mind, we all need a vacation once in a while. What if we tell you that your vacation could last for years and you could travel around the world? Would you take the chance? If you said yes, then probably the story of Zapp family’s 22 years of world travel could inspire you. The Zapp family – Herman and Candelaria and their children – have been travelling around the world since the year 2,000. After 22 years, 102 countries and countless memories, the family from Argentina is about to finish the trip of their lifetime.Also Read – Brazil Seek Confirmation of Replay With Argentina

Herman was 31 when the trip began and is now 53. Candelaria was 29 when the journey began and is now 51. In their 22-year-old world travel in a 1928 Graham-Paige, their family grew – Pampa, who is now 19-year-old born in US, 16-year-old Tehua born in Argentina, 14-year-old Paloma in Canada and 12-year-old Wallaby in Australia. Herman and Candelaria raised their four children on the road while covering 362,000 kilometers (225,000 miles)  during the world travel, news agency AFP reported. Also Read – Kaziranga National Park To Remain Close From March 26 To Conduct One-Horned Rhino Census

They are finally set to arrive back on Sunday at the same Buenos Aires site they left in January 25, 2000 on their wanderlust journey. Herman said he has “mixed feelings” on fulfilling the dream. Also Read – Bali Travel Update: The Island Scraps Quarantine Restrictions For Fully Vaccinated Travellers

“I have very mixed feelings. We are ending a dream, or fulfilling a dream. What will come now? Thousands of changes, thousands of options,” Herman told AFP.

Candelaria said her biggest learning during the trip was that “people are wonderful and humanity is incredible”.

Argentinian Candelaria Zapp hangs a dishtowel to dry next to the engine of the family car, a 1928 Graham-Paige, near Gaualeguaychu, Entre Rios province, Argentina, on March 10, 2022. (Photo: AFP)

Their journey was filled with many firsts. They ate duck eggs in Asia, had the opportunity to dance with natives in Namibia, touched Mount Everest, sailed across many seas and entered the tomb of King Tut in Egypt.

Why Zapp family travelled for 22 years

The couple were married for six years, had a good job and had then just built a house when they decided to travel around the world. It all started when someone offered them a car – a 1928 Graham-Paige. Candelaria said the car “would not start” back then and its engine was bad.

“The seats are not great, nor is the muffler. It does not have air conditioning, either. It is a car that you have to keep your eye on. It does not look comfortable, but it was marvelous. It was good in cities, in mud and on sand,” Herman was quoted as saying in the report.

In their 22 years of world travel, they used eight sets of tires and did engine-related works only twice. “It is nicer now than when it first came out,” Herman said.

They also had to made room in their car for their four children over the years.

Their 22 years old travel was not all a smooth ride. They also had a few hiccups along the way. Herman once caught malaria and the family also had to deal with Ebola in Africa and dengue fever in Central America. They also drove across Asia during the bird flu outbreak.

The family had used their savings for their trip and raised money on crowdfunding sites. “We had our old car and no knowledge of what we were going to do, but we were willing and I really believe if your dream can be accomplished with money, then that’s a cheap dream,” Herman was quoted as saying in a BBC report. During their travel, the family also depended on people for  accommodation, food and petrol for their car, the report stated.

The children were mainly homeschooled by their mother, Candelaria, and they mostly studied remotely.