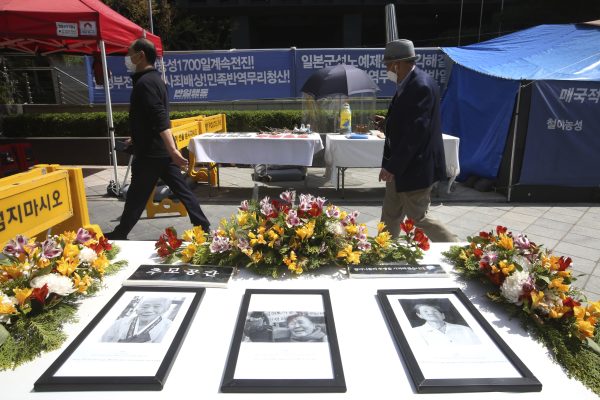 In December 2015, the governments of South Korea and Japan reached a “final and irreversible” resolution to the comfort women issue. Then-Prime Minister Abe Shinzo expressed anew his “most sincere apologies and remorse” and agreed to donate 1 billion yen (10.8 billion won at the time) from the government budget to support the victims. The Reconciliation and Healing Foundation was established, and the donation was paid to 34 of the 45 former comfort women who were alive at the time.

In 2017, the Moon Jae-in administration effectively abandoned this agreement made by the Park Geun-hye administration, citing the fact that the wishes of the former comfort women victims were not properly reflected in the negotiations. Despite the fact that the Foundation still held assets of 6 billion won, its charter was revoked and Moon declared that a “true resolution” had not been reached. The Japanese government urged the Korean government to adhere to the agreement and remedy what it considered Korea’s breach of international law, but this was met with inaction on the part of the Korean government.

In January 2021, another bombshell. In a lawsuit filed against Japan for damages by twelve former comfort women, the 34th Civil Division of the Seoul Central District Court ruled that Japan must compensate the plaintiffs 100 million won each. Many of the plaintiffs at this trial claimed that they had been abducted, which some of the former comfort women had also claimed. It was a textbook case of “forced recruitment theory” and was accepted by the Court at face value. Now, however, the forced recruitment theory is being significantly undermined. The testimonies of the comfort women are sometimes inconsistent. Prominent former comfort woman Lee Yong-soo initially said that she had been recruited on false pretenses, but later said that she had been forcibly recruited by the Japanese military. Moreover, Lee’s testimony is only her life story. It is not supported by objective evidence. No documents have been found to prove forced recruitment, and no family member, acquaintance, or other third party has come forward to testify to that fact.

Another key element relied upon by those affiliated with the anti-Japanese movement through the comfort women issue is the “sex slaves theory.” According to this theory, comfort women did not receive wages, could not quit even if they wished to, and had no freedom of movement in their everyday lives. According to the “basic facts” of the ruling, the Court has consistently adhered to the sex slaves theory. These are not, however, historical facts. Rather, they reflect the Anti-Japan Tribalism mentality of South Korea, a fictional assumption. “Comfort women” were engaged in a “high-risk, high-return” occupation. Some occasionally earned enormous sums, and a great many returned to Korea or re-entered the workforce after their contracted term of employment ended. Restrictions on daily freedoms applied equally to military personnel, civilian employees, nurses, and anyone else in the battlefield environment. In conclusion, comfort women were not sex slaves, but sex workers who were fundamentally no different from today’s sex industry workers.

The courts of one nation cannot exercise jurisdiction over the acts of another nation exercising its sovereignty, even if those act are unlawful. This is the principle of international customary law known as state immunity, and it is designed to prevent legal battles turning into armed conflict and to facilitate international peace. The Court declared that the actions taken by Japan for the mobilization, maintenance and management of the comfort women were “anti-humanitarian crimes” and handed down the ruling of an exception to state immunity.

In April of this year, the 15th Civil Division of the Seoul Central District Court handed down a ruling that was completely at variance with the January ruling, causing surprise both within and outside South Korea. A lawsuit filed by 20 former comfort women was identical in nature to that filed in the January trial, yet the Court dismissed it without deliberating on the facts, citing state immunity. The presentment relating to this accounted for almost two-thirds of the 79 pages of the judgment. According to this ruling, international customary law that considers a “humanitarian crime” as an exception to state immunity has not yet been established. Further, if we look at the rulings of courts at various levels in the United States, seven European countries, and the International Court of Justice in relation to illegal acts by the German army during World War II, with the exception of some courts in Italy, all granted state immunity in respect of the acts perpetrated by the German army.

The April ruling contains an important point of detail that should be noted. Namely, the law is not the sole or last resort remedy for “comfort women victims.” An alternative may be a “diplomatic agreement,” as the agreement between South Korea and Japan in 2015 showed. The ruling also goes into considerable detail on this point. Ultimately, the April ruling seems to be a “practical” ruling that considers the intention to find a realistic solution to the problem and ways of doing so. The January ruling rejected the common understanding of diplomacy as involving another party. The Japanese government is calling for the agreement to be observed and is unlikely to change its position in the future, given that not only Japanese political parties but more than two-thirds of the Japanese public believe that South Korea is responsible for the catastrophic situation. The January ruling was a “theoretical” ruling based on anti-Japan tribalism.

The April ruling is by no means without its problems. The Court accepted the forced recruitment theory and the sex slaves theory through the “basic facts.” Therefore, neither of the two rulings resolves the issue in any “fundamental” sense. However, we have to consider what is the current mainstream theory in Korean society. We must also remember the experience that changed the historical perception in Japan and the struggle that came with it. As we saw in the whirlwind of “anti-Japan tribalism,” the seeds of change in South Korea are now sprouting. And South Korea is “Dynamic Korea,” a country that is constantly changing.