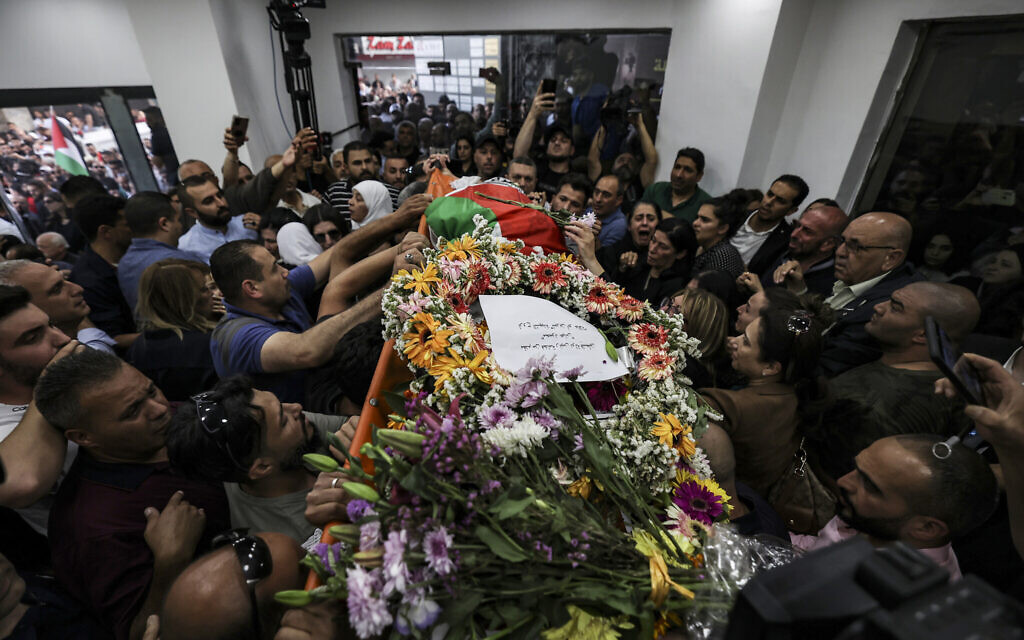 The Israel Police reportedly summoned the brother of Al Jazeera journalist Shireen Abu Akleh to a police station in Jerusalem on Thursday ahead of her funeral in the capital on Friday, which is fueling fears of unrest.

Abu Akleh, 51, was shot dead early Wednesday morning amid clashes between Israeli troops and Palestinian gunmen during an IDF raid in Jenin. The Palestinian Authority has accused Israel of “executing” Abu Akleh, but Israeli officials have declared that it is too soon to determine who fired the bullet which ended her life.

According to Haaretz, Anton Abu Akleh, her brother, was summoned to a police station in northern Jerusalem and warned that police will disperse the funeral proceedings if things get out of hand.

Joint List MKs Ahmad Tibi and Osama Saadi accompanied Anton to the police station, according to the report.

Friday’s funeral is slated to pass through Jaffa Gate and the Christian Quarter of Jerusalem’s Old City. Hundreds of thousands of people are expected to take part in the funeral for Abu Akleh, who was a well-known face in the Arab world for her decades of reporting for Al Jazeera.

According to the Ma’ariv daily, hundreds of police officers — including many undercover — are slated to be deployed on Friday along the funeral route to ensure things proceed calmly.

Shireen Abu Akleh, 51, a veteran Al Jazeera journalist who was shot and killed during clashes between IDF troops and Palestinian gunmen while covering an IDF raid in Jenin on Wednesday, May 11, 2022. (Courtesy)

The procession is expected to depart around 2 p.m. from her family’s home in the Beit Hanina neighborhood of Jerusalem and eventually culminate at the Christian Mount Zion Cemetery.

A police official told the Kan public broadcaster that every effort is being made to ensure the funeral proceeds without interruptions.

“The whole world is looking at us and at this event,” the official was quoted as saying. “The goal is to prevent as much as possible any friction.”

Concern has also been voiced about potential clashes atop the Temple Mount, the flashpoint holy site that has been the location of repeated unrest over the past month.

According to the Quds News Network, Hamas has called on its followers to barricade themselves inside the Al-Aqsa Mosque atop the mount and prevent any Israeli forces from entering.

At a state memorial for Abu Akleh held at the presidential palace in Ramallah and attended by thousands on Thursday morning, PA President Mahmoud Abbas repeated the unproven claim that Israel was responsible for the death of the journalist.

“We hold the Israeli occupation authorities totally responsible for her killing,” Abbas said, vowing to bring the case to the International Criminal Court. “This crime cannot go unpunished.”

A Palestinian honor guard carries the coffin of Al Jazeera journalist Shireen Abu Akleh who was killed amid clashes between Israeli troops and Palestinian gunmen during an IDF raid, in Ramallah, on May 12, 2022. (Abbas Momani/AFP)

Thousands of Palestinians, including Abu Akleh’s Al Jazeera colleagues, accompanied her body through the streets of Ramallah to the PA presidential compound. The crowds made an unusual sight at Abbas’s office, which has rarely opened to the general public in recent years.

Abu Akleh’s body was later borne in an ambulance to Jerusalem via the Qalandiya checkpoint, followed by a large procession of Palestinians. In footage broadcast by Al Jazeera, some masked Palestinians could be seen raising assault weapons and firing in the air.

An initial autopsy of Abu Akleh’s body by Palestinian coroners found that it was “not possible” to tell whether she was killed by Israeli or Palestinian gunfire.

Prime Minister Naftali Bennett said Thursday that the PA was hindering efforts to investigate the incident.

“I expect full, open and transparent cooperation,” he said, adding, “I also hope that the Palestinian Authority will not take any actions meant to obstruct the investigation or compromise its due process in a way that will prevent us from reaching the truth.”

Aaron Boxerman contributed to this report.