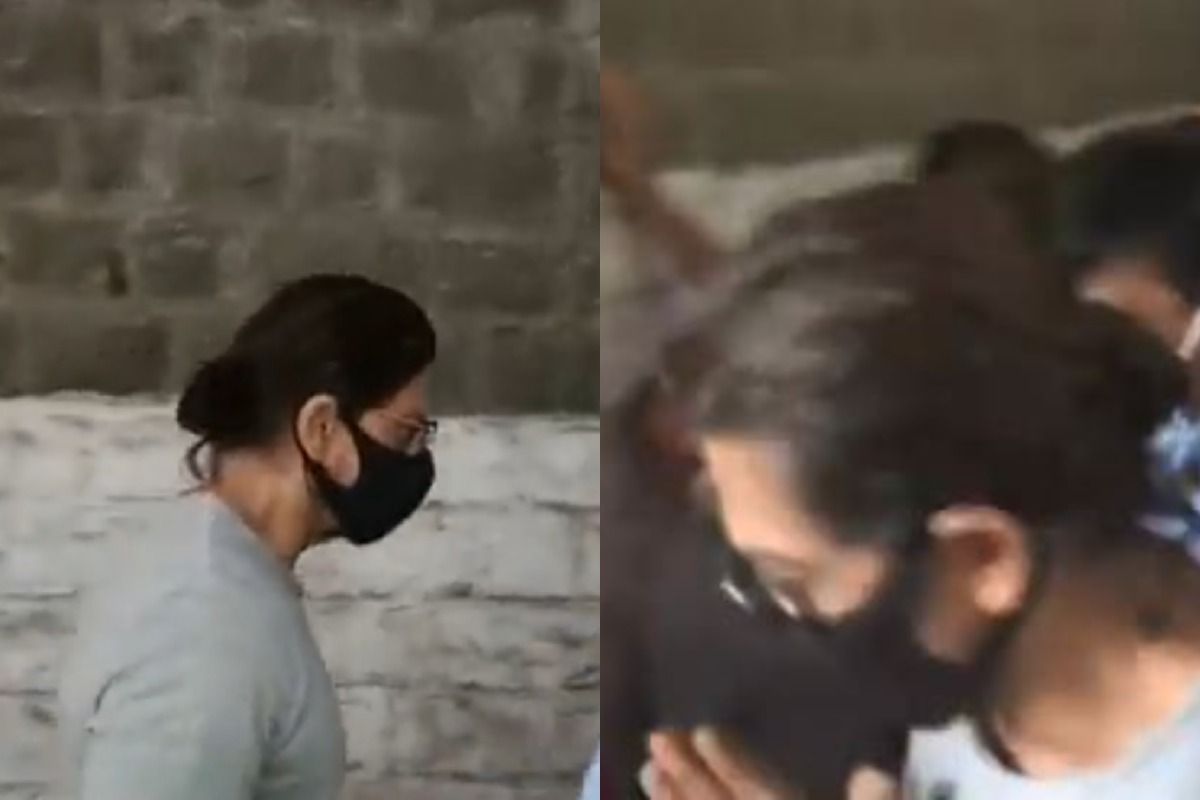 Mumbai: Bollywood superstar Shah Rukh Khan has reached today the Arthur Road Jail where his son Aryan Khan is lodged since October 8 after being arrested in the Mumbai drug case. The actor was spotted outside the premises and spoke with Aryan for almost 16 to 18 minutes. As per the NDTV report, Shah Rukh Khan had to take the visiting token to meet his son. Though, father-son came face-to-face, they spoke over the intercom with a glass wall between them. The jail authorities were also present at the visitation section when SRK spoke with his son.Also Read – Aryan Khan Bail Plea Live Updates: Shah Rukh Khan Reaches Arthur Road Jail To Meet His Son

ANI shared the video of Shah Rukh Khan heading out after meeting his son. The actor was spotted by shutterbugs and even folded his hands in front of the paps as he made his way to the car. Shah Rukh Khan has been said to have cancelled all his shoots and professional commitments since his son Aryan Khan’s arrest. Also Read – Twinkle Khanna Reacts To Aryan Khan’s Arrest, Compares It To Squid Game

Physical meetings at the jail were prohibited over the Covid-19 pandemic. These restrictions ended on Wednesday and Thursday was the first day of physical meetings in Maharashtra jails. Also Read – Aryan Khan Arrest Update : Aryan Khan’s Bail Denied ! Will Aryan Khan Get Bail Or Not ? Watch Video To Find Out

Aryan Khan’s lawyers are expected to plead the Bombay High Court on Thursday to hear his bail plea on an urgent basis. This comes a day after a special Narcotics Drugs and Psychotropic Substances (NDPS) court in Mumbai rejected the bail plea citing that the 23-year-old was indulging in ‘illicit drug activities’ on a regular basis, and could commit an offence if released. Soon after the decision was out, Aryan moved an application in the Bombay High Court against the special NDPS court order.

Along with Aryan, Arbaaz Merchant, and Munmun Dhamecha also had their bail pleas rejected on Wednesday by the NDPS court. The special court heard the bail petitions of all the three accused in the drug case and rejected it observing that all the three acted in conspiracy with each other and that all of them are connected in the same thread. The judge also accepted NCB’s argument that all the accused are part of a large drug network.

On October 2, the NCB busted a rave party in Mumbai and 20 people so far have been arrested in connection with the case including two Nigerian nationals, Delhi-based event management professionals, and Mumbai-based drug peddlers, among others.