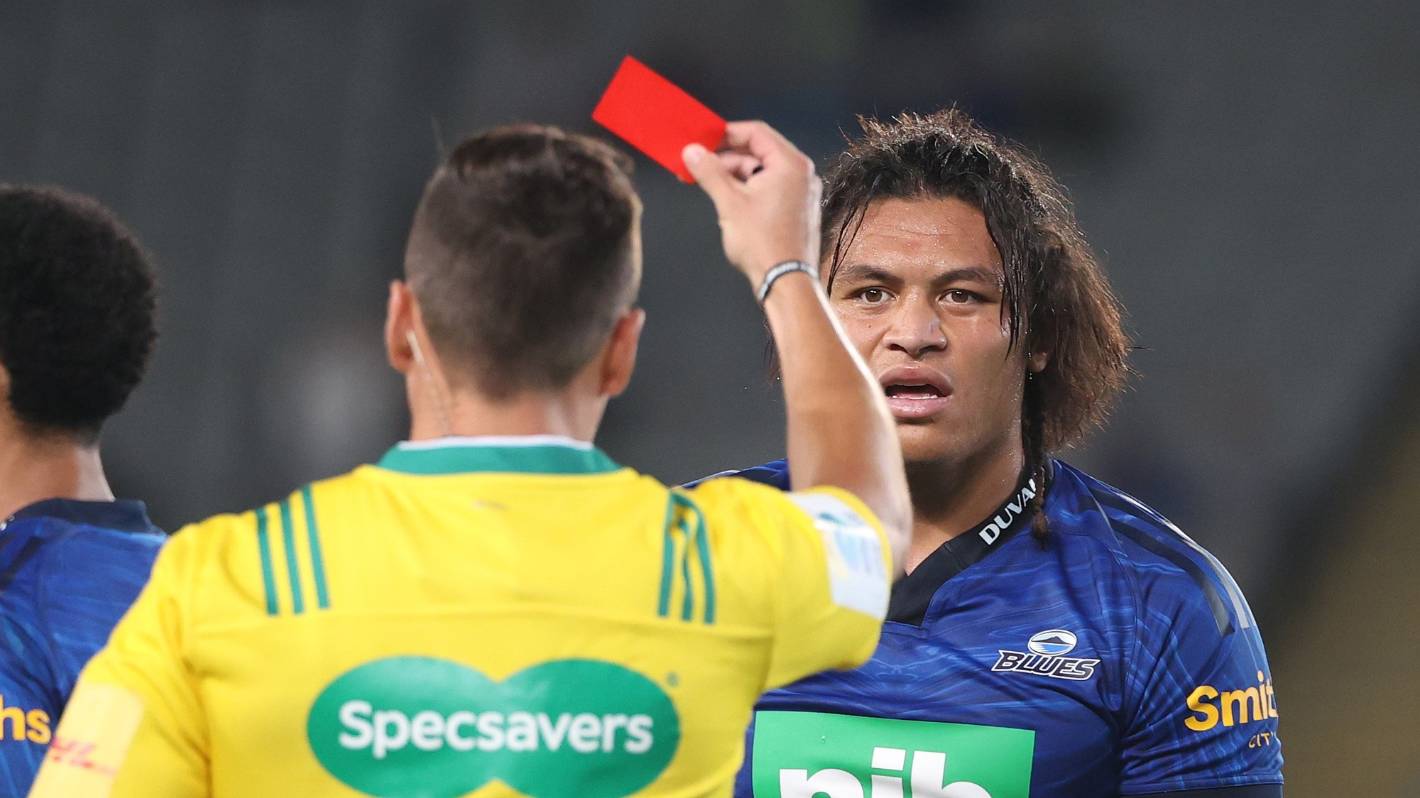 Caleb Clarke of the Blues is sent off by referee James Doleman during the round seven Super Rugby Pacific match between the Blues and Moana Pasifika at Eden Park.

Peter Lampp is a sports columnist and former sports editor based in Manawatū.

OPINION: Coaches have to take some of the blame for the red cards in Super Rugby.

While they say their players have to be better when they kamikaze into rucks, they are encouraged to go in hard-shoulder and changing tack late when an oncoming head dips is not easy for these beasts.

In the blink of a TV camera lens there is the risk of nailing an opponent’s head while in almost every cleanout someone’s head is being clipped.

Hence Crusaders hooker Shilo Klein and Blues’ prop Nepo Laulala both went for a skate for head-hits last weekend. It’s when the ruck has settled that late strikes are easily spotted by the video refs.

While it’s illegal for players to enter rucks off their feet and then they must endeavour to stay on their feet, almost everyone is flopping and perhaps because of that, referees have largely given up penalising it.

Meanwhile, Blues coach Leon MacDonald wanted to sympathise with All Black Caleb Clarke for his crazy hurdle and Clarke himself looked perplexed when he saw red for taking out Moana Pasifika’s Tomasi Alosio.

He shouldn’t have. In real time it looked terrible.

Perhaps Clarke’s defence was: ”His head took me out in the air and I could have bent my neck when I landed.”

Move over Hamish Kerr. Clarke should try out for the Commonwealth Games high-jump team. It’s not easy for a 107kg lump to get so high that his knee took out Alosio’s head at top speed.

The onus was on Clarke as the interceptor to make a safe interception.

Forget the ”no-malice” sentiment; the collision turned out being as serious as it could have.

It was top-shelf reckless, just like Jason Emery’s tackle for the Highlanders in Dunedin in 2016. His high-speed collision sent the Sharks’ Willie le Roux spiralling to the deck to land on his neck when he went aloft to take a catch.

Emery was full of remorse, but that too was irrelevant; he still copped a red and a four-week holiday.

In Manawatū club rugby on Saturday, there was a spectacular tackle on an unsuspecting College Old Boys attacker who was dancing in the clear until Old Boys-Marist flanker Rhys Pedersen came out of the clouds and vaporised him. While it was a missile of a tackle, it was from the side and perfectly legal.

Rugby league mostly prefers to put players on report and so on Saturday against the Warriors there was the ridiculous situation where Broncos forward Thomas Flegler stayed on the field despite being put on report four times. In rugby terms that would have been four yellows.

No 12 was home to Jordie

Can we smell the All Blacks’ interests in play with the shift of Jordie Barrett to second five-eighth for the Hurricanes against the Chiefs?

He is an unusual lofty shape for such a position, but that was home for him when he played in the Francis Douglas Memorial College 1st XV.

It’s obvious to everyone that Will Jordan is also a world-class fullback who has to be playing, as does Barrett. However, the Hurricanes also have a fine No 12 in Peter Umaga-Jensen and he too might be happier in that slot than was David Havili on the northern tour.

The Hurricanes are doing a lot of swapping, such as deploying Ruben Love all over the shop. Should he one day return to Manawatū, he would probably be at fullback.

Against the Chiefs the Canes delayed too long in bringing on Turbos halfback Jamie Booth. His quick thinking led to Ardie Savea’s try and the exciting comeback.

Also, the Cake Tin crowd was squeezed tightly into only parts of the stadium, hardly safe in the middle of a pandemic.

Why should we care?

A Kiwi friend in Colombia called and said we should now consider America’s Cup yachting the nautical equivalent of Formula 1 motor-racing.

He’s probably on tack. Most of the teams employ foreign helmsmen anyway.

It just rankled that New Zealand was fully invested in Burling and Tuke in the past two campaigns, taxpayers coin was too, and team bases were provided on Viaduct Harbour. Most of us thus reasonably expected victory would ensure the next version would be sailed back on Waitemata Harbour.

But no, Grant Dalton is carting the whole circus off to Barcelona where Spain probably won’t even have a team. It felt almost as treasonous as when Coutts and Butterworth jumped ship to Alinghi in 2000.

It seems only big money talks in this lark and the big guys inhabit mansions.

It’s hard to see what victory will mean to us in Barcelona and since it won’t be a return to Kiwiland, should we care if they topple off their foils and plunge to the bottom of the Mediterranean?