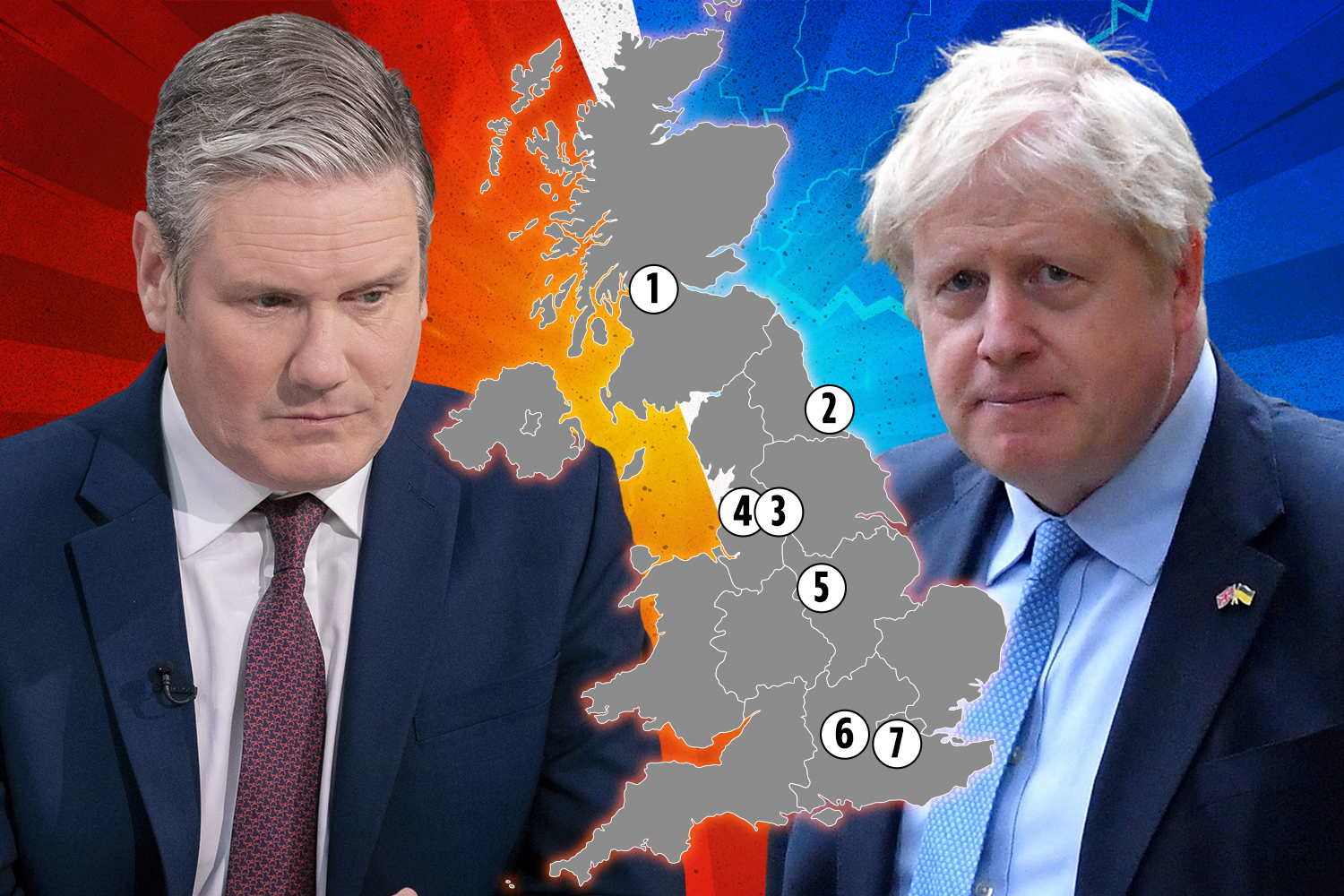 MILLIONS go to the polls tomorrow in crucial council elections that will swing the political fates of both Boris Johnson and Sir Keir Starmer.

While voters are really deciding who runs local services, the results are a major test of how both party leaders are faring nationally.

It is the first time the public will make their views known at the ballot box since the cost of living onslaught, Ukraine war and Partygate saga.

The PM is hoping to cement his grip on Red Wall battlegrounds he captured at the last election – while fending off a Lib Dem surge in Tory southern heartlands.

Tory chiefs are braced for a rough night, with pollsters predicting a bloodbath of seats falling to Labour and the Lib Dems.

Here are the seven battlegrounds to watch on election night.

Leafy Wandsworth in south west London is a flagship Tory council that has been controlled by the party since 1978.

But the Tories are now fending off a charge from Labour who smell blood and the chance of a totemic victory.

Sir Keir’s army of activists have been hammering the doorstep trying to capitalise on the PM’s national woes.

They are pledging to keep council tax low if elected to run the local authority.

But the Tories point to neighbouring Labour councils charging much more, and say only they have the track-record of letting residents keep more of their cash.

It is shaping up to be a tight race, with 33 Conservative councillors to Labour’s 26, meaning a relatively small swing could flip the council control.

A Labour win in Wandsworth would be totemic and be an earth-shattering blow to the PM. A result is due around 5. 30am.

Westminster and Barnet councils are also both in play and on Labour’s list of targets.

This time last year the Tories pulled off a huge upset in Labour heartlands by thumping them in the Hartlepool byelection.

It was the first time the North East fishing town had ever voted Conservative, and built upon Mr Johnson’s siege of the Red Wall.

Then the PM was riding high in the polls on a wave of vaccine optimism after overseeing the well-oiled jabs rollout.

Thursday’s council elections will be a key temperature check to whether he still retains support in northern working class areas.

Conservatives currently hold 13 seats on the council to Labour’s 11, while there are 10 Independents – leaving no single party with overall control.

Thirteen seats are up for grabs tomorrow and could tip the balance of the council’s leadership.

But BoJo and Sir Keir will be looking to see how the last 12 months has changed the mood deep in Red Wall territory.

The results are due at around 2am and so could set the tone for the rest of the night.

All 51 seats on Bury Council are up for grabs on Thursday in what is shaping up to be a razor-tight race in the North West.

Both Mr Johnson and Sir Keir have visited the town during the campaign in a sign of how close the contest is.

The parliamentary seats are among the most marginal in the country, with local MP Christian Wakeford dramatically defecting from the Tories to Labour recently.

Labour has run the council since 2011 and currently have 28 seats to the Tories’ 23. A result is expected at about 8.30pm on Friday.

Fifteen seats are on the table for this Derbyshire council on Thursday.

The Tories currently hold a firm grip on the local authority with 28 seats compared to Labour’s 15.

But the area is the ultimate general election bellwether and since the 1980s has always swung the way of the winning party.

It means a visible shift in the council elections will give a good indication of which way the tide is turning nationally.

One of the Blue Wall seats where the Tories are trying to fend off a blitz from the Lib Dems.

The Tories currently have 31 councillors compared to the Lib Dems’ 18, but fortunes could rapidly change.

Sir Ed Davey has been campaigning relentlessly in the Conservatives southern heartlands to chalk up some wins.

He has been hammering the Tories over Partygate and rising energy prices in the hope of winning over disillusioned Conservatives.

Another key temperature check of how both the PM and Sir Keir are faring in swing seats.

While sometimes bucking the trend, Bolton tends to also vote in line with national outcomes in general elections.

The current council make-up is ultra tight, with the Tories holding 20 seats and Labour on 19.

It means there is everything to play for, with the victor able to boast a big win on election night.

All council seats in Scotland are being contested this year, sparking skirmishes between the ruling SNP, Tories and Labour.

Nicola Sturgeon has a fight on her hands to stop Labour winning back Glasgow, which would signify her grip on the country is weakening.

Since Labour lost its hold on Scotland after the 2012 referendum the chances of the party winning a general election majority has faded.