If there had been turnstiles around Blacktown Showground, they would have been ticking over merrily, as an excited crowd gathered in the early morn, to watch the inaugural Feel The Magic Cow Pat Lotto.

For those new to the sport, it presents itself as a large field gridded in squares and randomly numbered, rimmed by a portable cyclone fence, which at one point funnels into a cattle shoot, hinting at the participants and objectives.

Soon a truck reverses to shunt the competitors in, each bovine bedecked in a coloured yoke of fabric, representing its divisional prize worth, the $10,000 dollop to be delivered by the bessy in blue.

“The blue sash is first prize; that means the cow pooing for that prize,” confirms judge Ben Coverdale.

The contentious issue of multiple squares is quickly addressed.

“It’ll be the square with the majority pat in it,” says Judge Coverdale.

It was now to the action. But there would be no action.

The five would graze heartily for their collective 20 stomachs, but there would be no important movement at the other end of the alimentary canal.

Judge Coverdale had other concerns.

“My biggest issue at the moment, that I’m worried about, is whether they’ll eat the numbers off,” he said, distracted by more gnawing of numerals.

There would be an informed audience watching on.

“Could be waiting a while,” quipped a fellow observer.

She agrees, “once the tail moves, we’ll be right.”

The reason for today’s tournament, to raise money for a small, uniquely homegrown charity, helping kids cope through camping, during what can be the most traumatic and truly awful of times.

“Feel the Magic is an Australian charity, that helps kids that are seven to 17 who experience the death of a parent,” informs Feel The Magic CEO Adam Blatch.

“One in 20 kids will experience this kind of grief.”

But sadly for the sport, only two cows would play from the lower prize divisions, the big money drawn from the random laptop barrel. 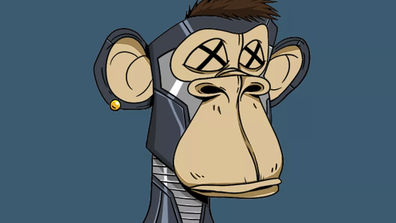 Bored Ape accidentally sells for one-hundredth of its market price

I confer with the boss post-match, “I spose you’ve picked up some lesson for next year; maybe five corks?”