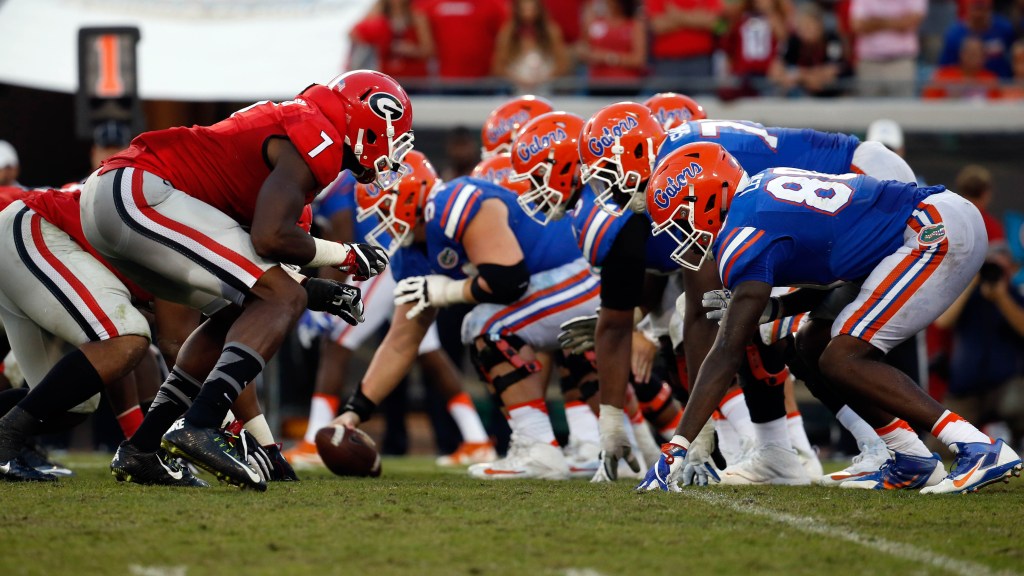 Any time you get to a big game week – and despite Florida’s record it is a big game – you will hear plenty of theories on how one team or the other can win the game.

Then, the game starts. And everything is blown out the window.

Take Florida’s loss to Kentucky. We all supposed that if the Gators could defend well and limit the running game, Florida would win. Of course, none of us had the game-changing drastically on a blocked field goal that went for a game-changing touchdown or that Florida’s advantage in the running game would be offset by 15 penalties.

Often in games like Florida-Georgia, the things we don’t think of jump up and change the game. Like Florida using a fake field goal that turned former walk-on Michael McNeely into a folk hero would spark a Florida win in 2014.

Or that Judd Davis would kick four field goals in the worst conditions ever for the game and Anthone Lott would call the most timely time-out in the history of the series to allow the Gators to escape in the 1993 game.

They may be hidden stats, but all we can go by going into the game is what each team has done so far this season.

… when you look at the fact that three Georgia defenders are possible first-round draft picks. We are pretty sure the NFL scouts know their names. Defensive tackle Jordan Davis, who missed last year’s game with an injury, is called “The Commander in Chief” of the defense and could be picked in the middle of the first round. Linebacker Nakobe Dean is in the same boat. And linebacker Adam Anderson certainly has a shot at being drafted late in the first round.

This is a stat that makes sense, and yet it does not.

Georgia has the fewest tackles of any team in the SEC. That makes sense because the Bulldog defense is so good that there are a lot of three-and-outs so the opposition doesn’t have the ball much. However. Georgia ranks 38th in the country in time of possession, three sports below Florida. Go figure.

Most people will point to this being a battle of Florida’s rushing game against Georgia’s rushing defense.

Turnover margin has not been good for the Gators.

They currently sit at minus-7 compared to a plus-3 for the Bulldogs, who have scored twice on interception returns this season (including the game-winner against Clemson). Florida no longer leads the nation in interceptions thrown thanks to Arizona taking that title while Florida was off. Florida’s 12 picks rank 129th. Yay!

We don’t know the starters at quarterback for either team

… and we assume that all four of them will play. Stetson Bennett, the losing quarterback in this game a year ago, has started since JT Daniels went down with an oblique injury. Daniels has thrown 71 times in three games while Bennett has thrown 82 times in five games as Georgia has started to lean on the run game more.

Florida has the leading rusher going into the game

… although we aren’t sure how much he will play in this one. Emory Jones has 495 rushing yards compared to Zamir White’s 400 yards for Georgia. White has seven touchdowns so far this season. Both teams can throw three quality tailbacks at the opposing defenses.

… especially when one of them was Kyle Pitts – but this year the Gators have only produced 19 catches from the tight end position. Georgia freshman Brock Browers has emerged as a go-to guy for the Bulldogs with 25 catches, six for touchdowns, so far this season.

… because of injuries to Davis and secondary star Richard LeCounte. This time around, the Bulldogs are healthy for the most part. Daniels should be cleared to play along with starting cornerback Ameer Speed, starting safety and interception leader Chris Smith and slot receiver Arian Smith, the fastest player on the Bulldogs’ roster.

The spread for this game hasn’t moved much

One more defensive gem for the Bulldogs