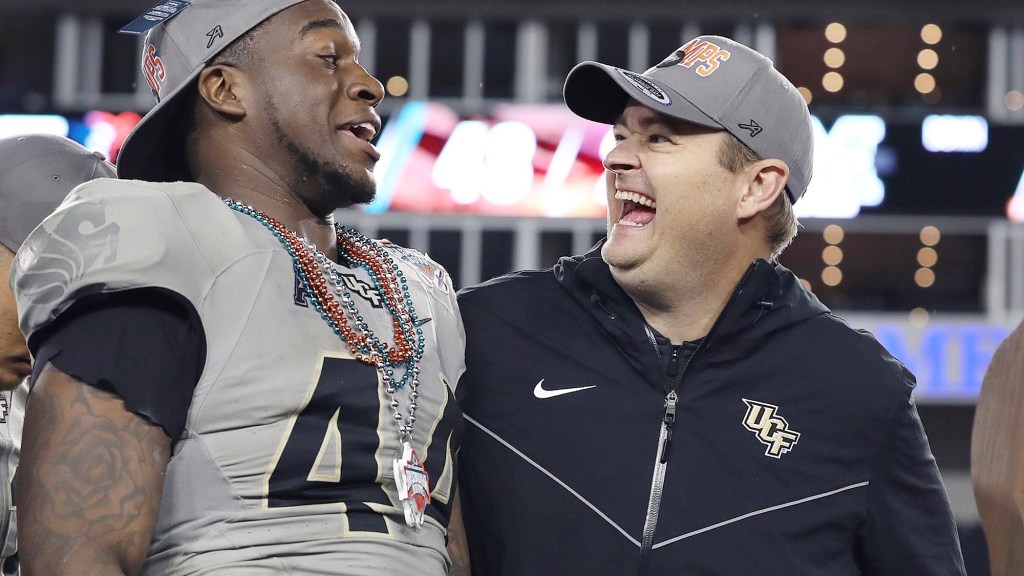 Here is the interesting thing about the Gasparilla Bowl – Central Florida got what it wanted, but I’m sure the Knights would have preferred one of their better teams received the chance to play the cross-state Gators in a bowl game.

UCF has had some great teams over the last decade. This isn’t one of them. They would like to show the college football world that they are ready for the Power 5 jump to the Big 12 in a couple of years. But not with this team.

And Florida would like to put little brother in his place before the Gators face them in the first of three regular-season games in 2024.

But not with this team and its skeleton staff.

Still, they must play. Just what Billy Napier needed: another rivalry game added to some of the future schedules.

Anyway, it’s still two weeks away, but here’s a quick primer on our neighbors in Theme Park City:

The Knights are no strangers to Tampa Bay’s Gasparilla Bowl

… playing there in 2019 against Marshall and former Gator assistant Doc Holliday. UCF won that game 48-25 with quarterback Dillon Gabriel the MVP (more on him later). That was the second game played at Raymond James Stadium (after the move from Tropicana Field in St. Petersburg) and the final one under the Bad Boys Mowers sponsorship.

Overall, the Knights have played in 12 bowls

… not bad for a school that didn’t start football until 1979. The Knights have played four of those games against SEC teams and have a 2-2 record in those games, with a big 34-27 win coming against Auburn in the 2018 Peach Bowl that spurred the school to declare itself king of the world.

UCF and Florida will play in 2024 in Gainesville

… in 2030 in Orlando and 2033 back in Gainesville. Don’t pencil them in because these are all subject to change because of the conference realignments. We still don’t know when Texas and Oklahoma come on board and SEC schedules are ripped up and started over.

… and his first season included the loss of his starting quarterback in the third game and a broken tibia he himself suffered during the Tulane game. Malzahn coached from a table on the sidelines for the final three games of the season.

Dillon Gabriel was another story.

The quarterback suffered a broken clavicle in the third game of the season and was lost for the year. He is also currently in the transfer portal. Gabriel was considered a dark horse Heisman candidate before the injury and UCF was 6-4 without him at quarterback.

… Malzahn has gone with a freshman from Chandler, Arizona, at quarterback. Mikey Keene has completed 63.6% of his passes for 1,586 yards and 16 touchdowns.

Perhaps the most famous person in the UCF contingent that will drive over on I-4 is the director of football operations.

Remember that little boy in “The Blind Side” who was portrayed by Jae Head? Well, S.J. Tuohy Jr. seemed like a guy who would gravitate to football administration and that’s what he has done at UCF.

One advantage for the Golden Knights is that they have won the turnover margin battle this season.

UCF ranks 29th in the country with only five lost fumbles and 9 interceptions. Florida, on the other hand, is 121st in the country. The two teams are tied with 34 sacks each.

The Knights love their home stadium.

They went 7-0 in the Bounce House this season, 1-4 in away games. Florida does have a small advantage in that they have already played at RayJay beating USF in the second game of the season.

This will be the fourth game for the Gators against a team from the state of Florida.

Florida handled FAU, USF and Florida State and could go 4-0 in state with a win over UCF. But this will be an interesting dynamic to see what the crowd is like and what players decide this bowl game is for them.